Both the Red and Black and the Athens Flagpole gave mention to the Georgia Museum of Art's final weekend of the "Southern Summer" series.

Southern Summer: The concluding event of the Georgia Museum of Art’s "Southern Summer" program is Sunday, Aug. 26 at 3 p.m. Collectors Lynn Barstis Williams and Stephen J. Goldfarb, along with James C. Cobb and Paul Manoguerra, will participate in a forum “examining the social context of art in the South in the 1920s through the 1940s.” Works on paper from the collection of Barstis and Goldfarb are currently on view in the exhibit “Imprinting the South.” With traditional printmaking techniques such as aquatints, etchings, lithographs and woodcuts, artists have created views of Southern towns and landscapes. New Orleans architecture is prominently featured in the work of several artists. Hale Woodruff’s “Returning Home” is a bold linoleum cut typical of the artist’s style. The exhibit is up through Sept. 16.

(The Flagpole also gives nice mention to the John Grabach and Smithsonian's Archives of American Art exhibitions at GMOA.)

Plus, listen for that Manoguerra guy tomorrow morning on 1340 AM WGAU during an interview by Barbara Dooley. 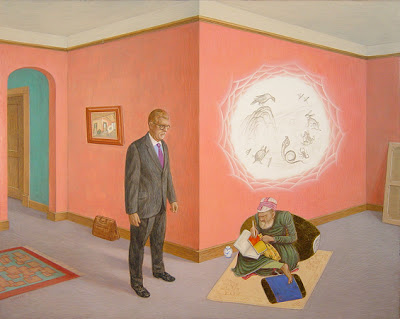 GMOA curator of exhibitions Dennis Harper has several paintings included in a group exhibition at the Swan Coach House Gallery, in Atlanta on the grounds of the Atlanta History Center. The exhibition? Manipulating the Commonplace: Nine Southern Artists Reinterpret Realism. It is open now through September 22.

Creative Loafing.com in Atlanta has a review of the show:

For this reason, Manipulating the Commonplace is the perfect fit for the Swan Coach House Gallery, deep in ladies-who-lunch territory. Clever and idiosyncratic, the paintings and sculptures in this group show have a superficial charm you could enjoy on your way to chicken salad and sweet tea. "Wheel of Fortune!" one woman laughed as she passed by a particularly haunting painting by Silas Durant and recognized the cheese-ball game show playing on a television in the work. Another group of women chatted merrily as they moved through the gallery. One woman laughed to her friends at the plaster-and-wood ice-cream cone by Greely Myatt, "Dammit," that looked like it had fallen off the wall. There is no reason why art can't delight on this purely whimsical level, and Manipulating the Commonplace does.

But those who dig something a little deeper will surely come away equally delighted at the exhibition's haunting, creepy, metaphysical dimensions. Complementing Scott Belville's and Durant's moody work are Dennis Harper's exquisitely skillful paintings that marry contemporary middle class dis-ease with the ecstatic realism of classical Renaissance and religious work in egg tempera and gold leaf.

Along with Philip Carpenter's wonderfully wise-ass drawings of pop-culture kiddie toys and cartoons juxtaposed with classical paintings, this quartet in particular shows how our banal surroundings can allow for both soul-destroying superficiality and spiritual striving. Like the elderly card-playing woman or the painter depicted in Durant's work, people are searching for some way of puncturing through the often lonely and dissatisfying membrane of ordinary life.

There is a desire to grasp at the eternal. Making art in Durant's "Convergence" or trusting in the Jesus night-light that illuminates a child's bedroom in Harper's "Terra Ombra" are two different ways of doing so. Often, Manipulating the Commonplace is the opposite of fun; it's instead deeply satisfying.

The Georgia Museum of Art has made available video from this past Sunday's "Southern Chefs" panel discussion.

The event was held in conjunction with the exhibition Imprinting The South: Works on Paper from the Collection of Lynn Barstis Williams and Stephen Jr. Goldfarb.

Follow the link [here] {avi file} to download.
Look for more museum-related video [here] in the near future.

More than Words and Southern Cooking

Last Saturday, the Georgia Museum of Art opened an exhibition -- More than Words: Illustrated Letters from the Smithsonian's Archives of American Art.

From the exhibition catalogue: "Words speak volumes, but, as every letter writer knows, there are times when they simply won't do. When the author happens to be a visual artist, he [or she] has an added advantage--one that transforms ordinary stationery into a canvas." More than Words "chronicles those occasions when words were not enough, and some of America's most revered artists turned their talents to illustrating their most intimate thoughts and feelings. ...Writing to wives, lovers, friends, patrons, clients, and confidants, premiere artists such as" Frederic Edwin Church, Andrew Wyeth, Thomas Hart Benton, Alexander Calder, Philip Guston, and Andy Warhol, among many others, "picture the world around them in charming vignettes, caricatures, portraits, and landscapes." There are also illustrated thank-you notes, love letters, maps and directions, "bon voyage" wishes, and more.

Details of two of my personal favorites: On the top, a detail of a letter, dated March 7, 1870, from Frederic Edwin Church to Martin Johnson Heade. From the exhibition: "In the late nineteenth century, landscape painters traveled great distances in search of exotic terrain. In 1870...Church wrote to...Heade, who was on his third trip to South America, where he painted the local flora and fauna against the spectacular backdrop of their tropical habitat. Church teases him for not finding the Sierra Nevada de Santa Maria--the highest coastal mountain range in the world--when Heade was standing at its foothills."

Wrote Church: "I tell you--you have missed a big thing...lately an American Engineer studied the mountain and measured it--and here's one of our Artists--couldn't find it when he was actually sweltering at its foot. Perhaps the mosquitoes were in the way thus--" And Church draws the image of the view of a tiny Heade being blocked by a swarm of mosquitoes.

On the bottom, a detail of a letter, dated July 30, 1876, from landscape and marine painter William Trost Richards to his major patron George Whitney. "In his letters to Whitney, [Richards] would frequently enclose miniature landscapes such as this one, which he called 'COUPONS,' so that Whitney could see a subject in advance and order a painting."

Organized by the Smithsonian's Archives of American Art, the exhibition remains open until October 14th.

This coming Sunday, the museum will also host a panel discussion on Southern food. Julie Phillips, in the Athens Banner-Herald, has the details [here]...and from the museum's web site [here]. From the site: "Nothing sums up the Southern experience more than its food, and this panel discussion will bring together some of the top culinary minds in the region. Charles Ramsey from Athens' award-winning Five & Ten restaurant, Linton Hopkins from Atlanta's famed Restaurant Eugene, Lee Epting from Athens' own Epting Events and Irene Smith, the author of Menus and Memories from Dixie Manor: The Pleasures of Entertaining at Home, will discuss the tradition and culture behind Southern cooking. Noted Athens historian Milton Leathers will serve as the panel's moderator.

Following the event, the museum will host a reception that shines the spotlight on Southern food companies, ranging from well-known brands like Moon Pie to smaller, family operated businesses like Aunt Ruby's Peanuts in Enfield, N.C. Also, the Southern Food and Beverage Museum in New Orleans is sending over a display of menus from Southern eateries across the country, and guests are encouraged to bring their own menus to donate to the SFBM."
Posted by Paul at 8:59 AM No comments: