From the Pierre Daura Archive: Shedding Light on the Cinq Refusés

Guest post by Madeline Bates, curatorial intern at the Georgia Museum of Art:

Before my first semester as an intern of the Georgia Museum of Art’s Pierre Daura Center for European Art, I had never heard of Pierre Daura, an artist about whom very little has been published despite his lifelong artistic career and interactions with some of the major figures of European modernism, like Wassily Kandinsky and Piet Mondrian. To learn more about the artist, I turned to the Pierre Daura Archive located in the museum’s Study Center for the Humanities.

While perusing the archive, filled with letters, newspapers, photos and similar ephemera, my interest was piqued by a Parisian exhibition in which Daura took part called the Cinq Peintres Refusés par le Jury du Salon, which ran concurrently with the November 1928 Salon d’Automne. This annual exhibition, established in 1903, was an important Parisian showcase for the work of modern avant-garde artists. A group of artists, including Henri Matisse, founded the exhibition in an act of creative opposition to the exclusivity of the Salon of the French Royal Academy of Painting and Sculpture; the traditionally conservative institution was not accepting of the innovations of modernism. In October of 1928, Daura and four artists with whom he worked in Paris submitted works of art that were subsequently rejected by the jury of the Salon d’Automne. The Cinq Refusés exhibition was quickly conceived and shown at the Galerie Marck in Paris. My interest in the Cinq Refusés largely sprung from the fact that the formation of the exhibition, much like the Salon d’Automne, was a response to the subjective hierarchy of fine art established via the Salons, the major artistic exhibition spaces of the period. 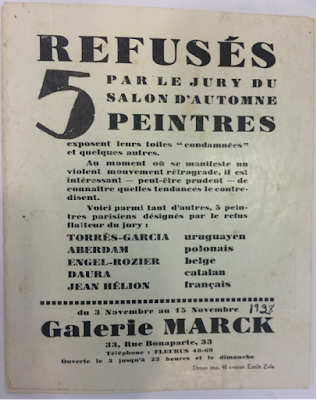 [Five painters rejected by the jury of the Salon d’Automne exhibit their “condemned” paintings and a few others. When a violent retrograde movement manifests itself, it is interesting—perhaps prudent—to know what trends contradict it. Here, so many among others, are five Parisian painters singled out by the flattering rejection of the jury: Torres-Garcia, Uruguayan; Aberdam, Polish; Engel-Rozier, Belgian; Daura, Catalan; Jean Hélion, French.][1] 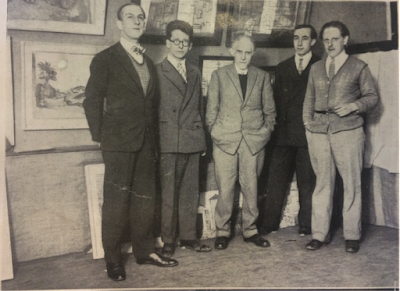 This international group of Cinq Refusés artists included Daura, from the Catalan region of northern Spain; Joaquín Torres-García of Uruguay, who organized the exhibition; Ernest Engel-Rozier, also known as Engel-Pak, of Belgium; Alfred Aberdam, of Poland; and Jean Hélion of France. Each painter worked in idiosyncratic modern modes, representing very different subjects and styles. Unfortunately, because only one or two photos of the exhibition survive, today’s knowledge of the exhibition content largely derives from critical commentary. Along the same lines, it appears that the planning of the exhibition took place in person, as there are no letters from this time between Daura and the other peintres refusés present in the Daura archive.[2] Daura’s personal diary from 1928, however, extensively recounts the days during this period and thus provides unique insight into the exhibition process.

By its twenty-fifth year, the 1928 Salon d’Automne had grown virtually to the scale of the Royal Salon, exhibiting more than 2,500 paintings. Critics reported that the Salon’s jury selection must have been arbitrary, for the work of Daura and his comrades was no worse—and in many cases, more interesting or better executed—than the Salon’s accepted works of art. Perhaps this was the case, as Daura’s paintings had been accepted for the Salon d’Automne in 1922 and 1926. Interestingly, in 1928, Pierre Daura secretly submitted a painting by Louise Daura, his bride-to-be and a fellow visual artist; her work was accepted by the Salon that year, and Pierre describes the occasion that Louise received her acceptance letter with enthusiasm in his diary.

Although the Cinq Refusés have received relatively little attention in art historical studies over the years, there was a great deal of contemporary critical acclaim in France and Spain, even reaching as far as America. Writers described the show with colorful language and varying degrees of compassion for the artists rejected by the Salon; some columnists embraced the show as a cheeky but well-purposed response, while others mocked and belittled the artists as failures.  Many writers suggested, in reference to the formation of the Salon d’Automne, that with the Cinq Refusés, Parisian history was repeating itself.

One contemporary Parisian review, published under the penname Nephtalie, speaks of the juried salon as a “dying institution” and expresses support for the Cinq Refusés creative mission:


If it is a battle to fight, I say immediately to these five men that I am by their side, because it really seems to me too that all Salons they force-feed us are really too formal and dying. Let those who have talent get up and move; we will be with them![3]


I found that Spanish publications gave the work of the artists more attention than did French newspapers, which more often provided only exhibition announcements or a critique of the Salon’s selection methods rather than reviews of the show’s artistic content. English translations of most of these articles, particularly those in Catalan, have never been published. Across Spanish and French papers alike, Daura received consistent praise for his still life paintings featured in the exhibition. I was delighted to find that Daura’s diary includes a rough sketch of the very still life Daura would later send to the Salon d’Automne and show in the Cinq Refusés exhibition. 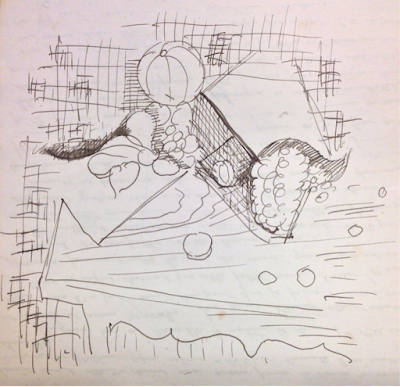 A sketch of a natura muerta scene from Daura’s diary, located in the Pierre Daura Archive, from August 1928. 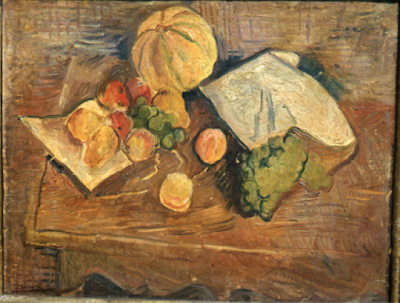 La Publicitat de Barcelona, a Catalan newspaper, presented an especially interesting review of the exhibition. The article, entitled “Els cinc refusats de Saló de Tardor de Paris,” gives each artist careful consideration and provides extensive commentary on the role of the show within the scope of the changing nature of exhibition spaces. Concerning Daura’s Naturas Muertas, the author comments: "The great value of the Catalan Daura’s canvases lie particularly in their finesse and subtlety. This artist painted unassuming still-lifes and landscapes in an agile and nuanced manner.”[4]

The exhibition of the Cinq Refusés, which reached its eighty-seventh anniversary in November 2015, represents a pivotal moment in the history of these artists’ careers. Daura’s close association with Torres-García—a lifelong friendship that began in 1926 when, connected by a mutual friend, Daura organized Torres-García first Parisian art show—would lead to his relatively short-lived experiments with abstract constructionism and his involvement in the international exhibition group Cercle et Carré. This show was particularly formative for Torres-García: the artist received significant recognition in the press for his organizing role, the first in a long course of gathering together international groups of artists, such as Cercle et Carré and its South American counterpart, Círculo y Cuadrado. Furthermore, scholars have long said that Cinq Refusés exhibition was where Torres-García first met the Dutch artist Theo van Doesburg, a founder of De Stijl who would later oppose the ideals of Cercle et Carré with his own group, Art Concret. In my research for this blog post, I came across a letter written by Torres-García that indicates he met van Doesburg at least six months prior to this exhibition; the letter, then, raises important questions for this period in Torres-García’s career. For the artists the exhibition brought together and its juxtaposition to the Salon d’Automne as well as the lingering questions surrounding it, the Cinq Peintres Refusés par le Jury du Salon remains a fascinating moment in history deserving of further scholarly examination.

Posted by Madeline Bates at 8:53 AM