David Ligare and the Meaning of Xenia 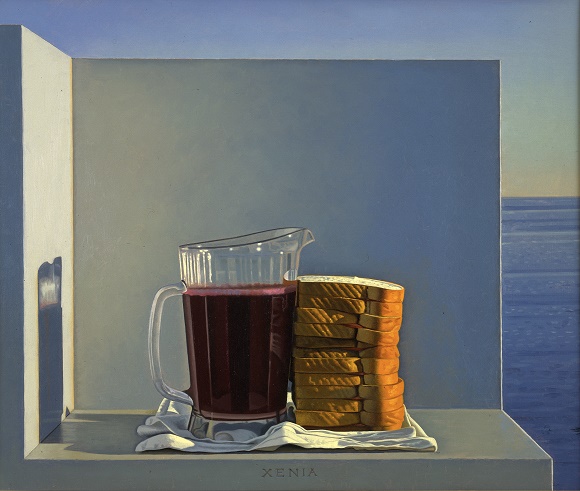 The painting discussed in this blog post is featured in “David Ligare: California Classicist,” a retrospective exhibition on display at the Georgia Museum of Art through May 8.

Upon first sight of David Ligare’s work, it’s easy to feel transported to Homeric Greece.[1]  In a time when contemporary art is often abstract and non-representational, Ligare pulls from the traditional subject of still lifes, landscapes and nude figures. He fuses modernity and antiquity, synthesizing a new ideal that celebrates both tradition and contemporary society. Like the Renaissance artists of the 16th and 17th centuries, Ligare realizes society’s “need of a renewed desire for knowledge,” and he seeks to elevate the viewer’s intellectual growth by means of the “literate picture[2].” The Renaissance marked a period of humanism and it was highlighted by the works of Michelangelo, which synthesized contemporary religion with a renewal of classical themes.[3] Ligare’s paintings function similarly; he synthesizes classicism with objects indicative of modern society. Despite his unmistakable affiliation with unfashionable subjects and dated means of representation, David Ligare has thrived in the modern art world because he finds equilibrium between relevance and irrelevance. His paintings depict his native California landscape to substitute that of Greece or Rome, and he paints from living models rather than ancient Greek sculptures. Also, inspired by the writings of John Steinbeck and Robinson Jeffers, he very deliberately fabricates narrative paintings that speak greater truths about the subjects and the environment surrounding them, though narration is frequently omitted in modern art. In keeping with works that recede under the dominance of more nuanced paintings, Ligare’s still lifes maintain an unassuming presence, but also typical of his work, the still lifes showcase the greatest reinvention of an old practice. In “Still Life with Grape Juice and Sandwiches (Xenia),” Ligare utilizes the simplest of objects to create the deepest of meanings.

Although his still lifes lack an immediate narrative resonance, Ligare very thoughtfully chooses his objects and their lighting to provide his subjects with new life and to expand the potential of this long-forgotten practice. Be that as it may, he manages to create a semblance of allegory in the way his objects burst with meaning specific to Greek myths, like mementos of heroic journeys. Alluding Homer’s great epic, The Odyssey, “Still Life with Grapes and Sandwiches (Xenia)” directly references the Greek custom of xenia. Literally translated as “guest-friendship,” xenia refers to the tradition of hospitality when hosts would treat weary travelers with the utmost generosity, and guests would return the favor with the utmost courtesy. Integral to this practice is the offering of wine and bread, and many times throughout Odysseus’ journey, he is provided the very substances. Characteristic of Ligare, he pulls from this deeply rooted ritual and re-contextualizes it with contemporary objects. Instead of rich wine and authentic loaves, he presents a pitcher of cheap grape juice and a heap of bologna sandwiches on highly artificial bread. The grape juice is presumably of poor quality because Ligare was inspired by his time serving in a soup kitchen for the homeless in Salinas, California. There is something distinctly resonant in the difference between homeless people today, with whom most people avoid eye-contact, and the temporarily homeless travelers of ancient Greece who were treated just short of gods. Granted, the hosts feared the retribution of failing to accommodate gods in disguise, but the Greeks had a well-developed humanity that became influential to Ligare and Renaissance artists alike. Though the xenia of today functions in a dramatically different context, the heartfelt connection he felt with the homeless he served is evident. The unsettling divergence between xenia and its modern equivalent is how it has been transformed into the most menial offering of food, the minimum sustenance for life in an increasingly arduous world.

Much as the grape juice and sandwiches act as the essential substance of life for the homeless, Ligare’s still lifes resound their own essence of life. Still lifes have historically been divided into two categories: memento mori, which emphasize the remembrance of death, and vanitas, which deal with the transience (or even futility) of life. The way morning light strikes the objects and the way food connotes the preservation of life suggests the latter, entertaining a feeling of hope with a subconscious understanding of the food’s inevitable spoilage. The ephemerality of food parallels that of humanity, but Ligare typically uses fruit that suggest the abundance and prosperity of life — like plums, apples, and olives. Food has a particularly poetic quality in the way it functions both as a core component of life and as an object of love and comradery between people. In “Still Life with Grape Juice and Sandwiches (Xenia),” Ligare also capitalizes on the sacramental quality of wine and bread in the Christian religion, framing it in an altar of sorts. The Greeks frequently made offerings to gods in celebration of their prosperity, so the stage functions as an altar in which ordinary objects gain religious significance. Originally a pragmatic solution to a compositional problem, the box fulfills several artistic purposes. Primarily, he seeks a controlled space in which to conduct rigorous investigations of the objects, but it also fosters a “harmony of wholeness,” as the artist puts it, which resembles the work of old masters. The marble box is also conducive to Ligare’s heavily-controlled style, providing a space of measured precision matched only by the sculpture and architecture of Hellenism. The enigmatic, sterile background creates a sense of isolation akin to surrealism, but it merely acts as a medium through which to emphasize the allegorical potential of the grape juice and sandwiches. By granting inanimate objects the attention provided by painting and exhibition, Ligare forces ordinary commodities into the forefront of a viewer’s thoughts, fostering a greater appreciation for an object’s narrative history.

“Still Life with Grape Juice and Sandwiches (Xenia)” marks a culmination of Ligare’s most significant accomplishments in still life painting. It connotes a Greek tradition which speaks to both his humanitarian goals and his affinity for classicism. Whether it be a reference to the continuation of xenia, the practice of the Christian Eucharist, or the simple act of giving food to the homeless, Ligare capitalizes on the potential plurality of meaning within objects and expands the boundaries of still life painting by dramatizing the transience of meaning throughout the course of history.


[1] Homer is the author of the epic poems The Iliad and The Odyssey, two defining works of the Greek people and two of the oldest pieces of literature ever known.
[2] Words from the artist in David Ligare: California Classicist by Scott A. Shields.
[3] Humanism was a concept that reemerged during the Renaissance and emphasized the intellectual and creative potential of man.