International Leaders Find Some Time to Enjoy The Arts 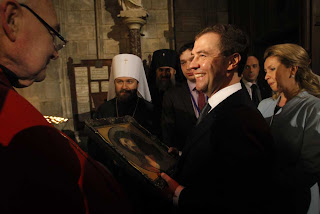 Russian President Dmitry Medvedev and his wife, Svetlana, visited Paris earlier this week to discuss a possible major military deal between Russia and France. Medvedev spent the week with French president Nicolas Sarkozy, and the two found some time during their visit to put state issues aside and indulge in some of the many cultural pursuits Paris has to offer.

Medvedev and Sarkozy were given special access to the Louvre Museum, which is closed to the public on Tuesdays, for a look at one of the museum’s top exhibits this year.

Svetlana Medvedev was joined by Russian Culture Minister François Mitterrand and his Russian counterpart, Alexander Avdeev, on a tour of an exhibition of oil paintings and watercolors by young Russian artists that reflect a romantic view of Russia, with Impressionist-inspired views of the Volga River Valley.

Paris welcomed the Russian visitors with flair. Medvedev arrived at the French capital by helicopter and golden-helmeted guards on horseback led his limousine across the Alexandre III Bridge, named for the second-to-last czar of Russia.
Posted by Ashley James at 1:40 PM