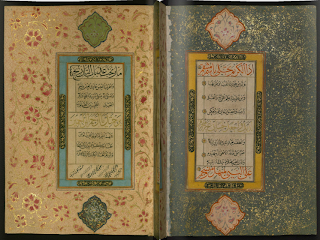 This article by Lee Shearer in the Athens Banner-Herald on UGA Press's move toward some digital printing (specifically on-demand printing of books less in demand) reminded us of a couple of related links, neither of which at first would seem to be connected. Art Daily published an article today about the British Library's digitization of the Codex Sinaiticus, the world's oldest surviving Christian bible, which dates from the 4th century. Its physical pages are scattered in the British Library, the Leipzig University Library, the Monastery of St Catherine (Mount Sinai, Egypt) and the National Library of Russia (St Petersburg), so the website the library has created is the only way to see all of them at once, let alone flip through the book. Similarly, the Walters Art Museum in Baltimore posted three high-resolution digitized Korans on Issuu (a two-page spread from one appears above).

Both these projects and the efforts of UGA Press allow us to think about the spread of works of art and books in the digital age. It's true, there's nothing like holding a physical book in your hand, but there are other ways in which digital versions are an improvement, such as the fact that they're vastly easier to search. We don't plan on relying on digital printing or digital distribution any time in the near future (color reproduction isn't there yet for the former, and the latter often doesn't have color at all, as in the case of the Kindle), but we are working on digitizing our entire collection of brochures and smaller booklets, to cut down on the storage space needed and to promote scholarship. Currently, if someone's writing a book on, for example, Earl McCutcheon, and sees that we had an exhibition of his work with a large brochure, it's difficult to go find that brochure, expensive to mail it and hard to find the space to store it. When we're finished, we should be able just to burn a CD or, better still, send a link, plus these publications will be searchable. Hooray for the future!
Posted by Georgia Museum of Art at 2:25 PM