The Georgia Museum of Art has appeared and re-appeared all across the World Wide Web in recent days. Here are a few links to some of those appearances:

* In the UGA independent student newspaper, found at redandblack.com, there is an article "Museum displays fabric of daily life" on Ashley Callahan's American quilt exhibition. The quilt display also appears in the "Resource Library" at Traditional Fine Arts Organization's web site. Some nice images there.

* The Modern Indian Works on Paper exhibition has been mentioned at Artdaily.com and redandblack.com.

* All of our new exhibitions found mention in Beth Sale's "Art Notes" in the Athens Flagpole.

* A review of the John Grabach: Century Man traveling exhibition, now at the Morris Museum in NJ and coming to Athens in July 2007, at NorthJersey.com.

* Another future exhibition, this one curated by Dennis Harper here at the museum and coming up in October, gets a blurb. Titled Weaving His Art on Golden Looms: Paintings and Drawings by Art Rosenbaum, the show earns a place at "Art Knowledge News."
Posted by Georgia Museum of Art at 9:49 PM No comments:

"It's a Controversy on canvas"

Julie Phillips and the Athens Banner-Herald staff took an interesting approach to presenting our current exhibition The Eternal Masquerade: Prints and Paintings by Gerald Leslie Brockhurst (1890-1978) from the Jacob Burns Foundation. They asked if we would drape the portrait of the Duchess of Windsor, which is not allowed to be photographed for any purpose, by Brockhurst so that they could use the draped version as an image for their article. The results:

This painting on display at the Georgia Museum of Art cannot be photographed or reproduced in any way until after the death of the queen of England.
Photograph by John Curry/ABH Staff

It's a Controversy on canvas
Why can't we show you this painting?
By Julie Phillips

Oh, the scandalous lives the rich and famous lead.

Mind you, in her portrait, the Duchess of Windsor could be your stuffy, even boring, wealthy Aunt Bessie, smiling politely, not a hair out of place. But her likeness, painted by famous portrait artist Gerald Leslie Brockhurst and currently on display at the Georgia Museum of Art, can't be reproduced in any way until after the death of the current queen.

It seems the Duchess - née Bessie Wallis Warfield and a divorcée twice over - earned the love of King Edward VIII while she was still Mrs. Ernest Aldrich Simpson. When Edward announced his plans to wed her upon her divorce, he was forced to abdicate the throne and went into exile after marrying her in 1937.

Exile for nobility is hardly the poor house, however, and the former Mrs. Simpson earned the title of Duchess in the arrangement as her husband became the Duke of Windsor. In her portrait, her exquisite brooch offers evidence that the woman who'd spent much of her childhood in poverty did extremely well for herself.

The Duchess is just one of many faces with colorful stories to tell in "The Eternal Masquerade: Prints and Paintings by Gerald Leslie Brockhurst (1890-1978) from the Jacob Burns Foundation," on view through Oct. 8. Curator Romita Ray notes that, while it's an impressive showing of the artist's work in terms of content and scale, it's nonetheless a small collection in the career of the prolific British artist. Brockhurst was the country's most famous portraitist during the first half of the 20th century, and painted some of the world's wealthiest elite.

Brockhurst wasn't without his own scandals, either, though.

While married to his wife, Anaîs, who posed for numerous works by the artist, Brockhurst fell for a teenage model, "Dorette," more than 20 years younger than he. An early etching of Dorette, a nude titled "Adolescence," was published just after Brockhurst had become romantically involved with the then 18-year-old, and the London media reported on the relationship just after the etching was published.

Perhaps for the scandal surrounding it, it remains among Brockhurst's most famous works. But it also reveals the skill of a true master, notes Ray.

"It's a fantastic exercise in light and different surfaces - the hard, cold glass of the mirror and the softness of the skin," Ray says.

A number of works featuring both Anaîs and Dorette are represented in the show; Ray notes it would be nearly impossible to offer a collection of the artist without these, as both women were favorite (at different times) and frequent subjects for Brockhurst.

The exhibit features a variety of portraits of other subjects as well, from pouting children to astute, be-suited businessmen, among them the famous J. Paul Getty, painted, notes Ray in the exhibit catalog, "with a hint of modernism" by an artist who drew much of his influence from the Italian masters, "filtered through the Pre-Raphaelite preference for early Renaissance painting," notes Ray in the catalog.

In fact, Brockhurst, master that he was, was much at the mercy of pleasing his subjects and those who commissioned his work. While his attention to detail and obvious affinity for giving depth and texture to his sitters' faces shines in every work, Brockhurst was obliged to soften edges, hide flaws and romanticize his subjects at their request.

"These are works of fiction created out of real bodies," Ray says, adding these commissioned works were kept in private collections, for the most part.

Today, they are part of the collection of the Jacob Burns Foundation, named for Brockhurst's longtime friend and lawyer, who himself dabbled in portraiture later in life, painting a portrait of Brockhurst himself in 1964. In December 2001, the Jacob Burns Foundation designated the GMOA as the temporary repository for the archives, paintings, prints and drawings, and Ray, who has a strong interest in British art, says she made it her goal to bring the exhibit to the museum. Although Ray recently left her post as curator and prints and drawings for a position at Syracuse University, she says she'll return in late September to see the show.

Ray admits to a fascination for the genre of portraiture in addition to being interested in Brockhurst's work.

"It's one of the oldest genres, you see it in sculpture and photography as well ... and it's more accessible as a genre. There's a more intimate awareness of the human body when we look at a portrait. And we want to know who are these people and what are their stories."
Posted by Georgia Museum of Art at 9:48 PM No comments:

On rare occasions, I get asked about what books are good and interesting reads in "museum studies." Authors dealing with the museum in American culture often extol inclusiveness, plurality, and constant re-evaluation as key if museums, especially art museums, wish to help construct a new idea of ourselves as a nation. Here are quick reviews of two fairly recent publications that critique "the museum": 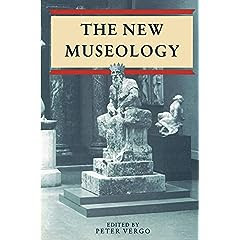 Peter Vergo, ed., The New Museology (London: Reaktion, 1989).
In 1989, Peter Vergo edited a series of essays on the museum and its functions. The essayists in The New Museology note that objects have multiple meanings, museums are products of cultural and ideological discourse, and museum visiting is itself a cultural phenomenon. The many authors note that the act of collecting always has had a political, ideological, and/or aesthetic dimension. Every acquisition and deaccession in a museum, every juxtaposition of objects, every arrangement of a work of art "means placing a certain construction upon history, be it the history of the distant or more recent past, of our own culture or someone else's, of mankind in general or a particular aspect of human endeavor." Museums (if they ever truly were) are certainly no longer, the essayists argue, bastions of "true" knowledge and temples of objective truth. Every museum exhibition, whatever its subject, inevitably draws upon the cultural assumptions and resources of the people who create the exhibition. 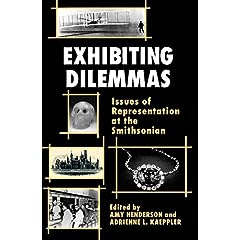 Amy Henderson and Adrienne L. Kaeppler, eds., Exhibiting Dilemmas: Issues of Representation at the Smithsonian (Washington and London: Smithsonian Institution Press, 1997).
Published to commemorate the 150th anniversary of the Smithsonian Institution, Exhibiting Dilemmas utilizes twelve essays by Smithsonian staff members to address issues of ideology, cultural assumptions, and curatorial practices. Steven Lubar, in the book's opening essay, calls for museum curators to make use of audience "memory" within exhibitions and to explain the complexities of exhibitions to visitors. But the most intriguing essays in Exhibiting Dilemmas are the ones that focus on historicizing and deconstructing the myths around individual objects: 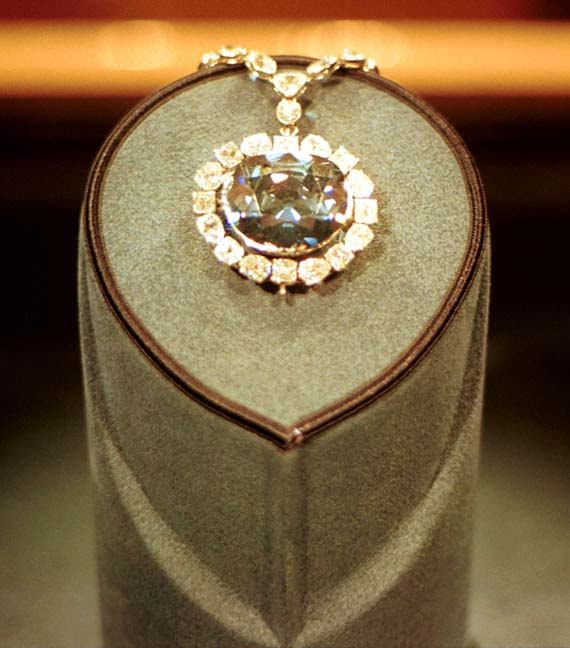 The meaning of objects, and of museums' display of those objects, changes over time. Past exhibitions represent past ideological, political and cultural discourses.

As time permits, I will post on some more museum studies books that I have enjoyed reading.
Posted by Georgia Museum of Art at 9:46 PM No comments:

London's Tate Modern announced plans for a very postmodern addition. Designed by the Swiss firm Jacques Herzog and Pierre de Meuron, the architecture of the new wing seems to play with the idea of the gallery as white cube, and ancient Mesopotamian ziggurats. The price tag: $397 million. The Tate Modern plans to have it ready by the 2012 London Olympics.

The National Archives in DC has an exhibition -- Eyewitness -- that features "[t]reasures in the form of letters, diaries, photographs, and audio and film recordings, culled from the billions of documents in the holdings of the National Archives and its Presidential libraries, open new and unique windows onto well-known events." If you can't get to DC before it closes in January, the Archives has an on-line version [here]. 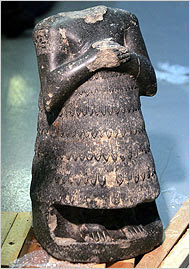 One of the most important treasures looted in the ransacking of Iraq’s national museum three years ago has been recovered in a clandestine operation involving the United States government and was turned over to Iraqi officials in Washington recently. The artifact, a headless stone statue of the Sumerian king Entemena of Lagash, was stolen from Iraq, taken into Syria, and came on the market. The backstory of the recovery remains a secret in order to protect future recovery efforts.

Posted by Georgia Museum of Art at 8:08 PM No comments: