The Hitchcock film series at the Georgia Museum of Art continues tonight at 7 p.m. in the M. Smith Griffith Auditorium. Professor Janice Simon will introduce Saboteur, which you can watch the original trailer for above. The screening is free and attendees can park in the visitor lot at the museum.

The Art of Disegno: Italian Prints and Drawings from the Georgia Museum of Art 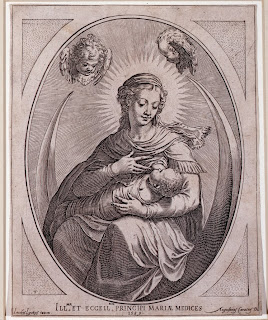 Another exhibition the museum has organized for a far-off venue is The Art of Disegno: Italian Prints and Drawings from the Georgia Museum of Art, which opened this past week at the Snite Museum of Art, in Notre Dame, Ind. Organized by curators Robert Randolf Coleman, who teaches at Notre Dame, and Babette Bohn, of Texas Christian University, the exhibition comprises just over 50 prints and drawings of exceptional quality produced from the 16th to the 18th century by artists including Titian, Parmigianino, and Piranesi. Most of these works come from the collection of Giuliano Ceseri, which is on long-term loan to the Georgia Museum of Art. Ceseri began collecting drawings while a child in Florence, and although he has never received any formal training in art history, his combination of eye and enthusiasm are unmatched. The Art of Disegno provides a chance to experience the work of masters intimately, seeing both their development (through sketches) and the increasing prevalence of printmaking as a way to distribute art more widely.

The exhibition is on view at the Snite until March 1, 2009, and is accompanied by an exhibition catalogue that reproduces each of the works full page and in color with a discussion by Coleman or Bohn. Giancarlo Fiorenza, who served as in-house curator of the exhibition at GMOA and has since moved on to a teaching position in California, supplies an introduction geared to the layman that explains the importance of disegno (or "drawing") in Renaissance artistic academies. The catalogue is for sale through the Georgia Museum of Art shop or, for wholesale orders, through GMOA's Department of Publications.

The American Scene on Paper: Prints and Drawings from the Schoen Collection 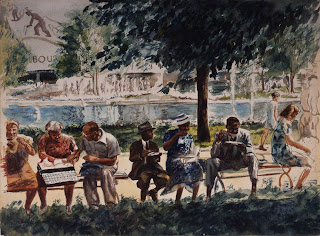 The museum may have closed its galleries to the public in preparation for the Phase II renovation and expansion (breaking ground on March 3), but the staff has been busy organizing exhibitions and lending out works of art elsewhere. The American Scene on Paper: Prints and Drawings from the Schoen Collection is an example of these exhibitions organized for other institutions, some of which will eventually be shown here, after the reopening in 2011. Designed as a parallel exhibition to Coming Home: American Paintings, 1930-1950, from the Schoen Collection, which the museum organized with the Mobile Museum of Art in 2003, it features many of the same artists and much of the same subject matter, from portrayals of the plight of the farm laborer to depictions of industry and the growing urban environment. The prints, drawings and watercolors featured in the exhibition represent various manifestations of realism, whether magical, fantastic, social or romantic. Several of the artists moved from abstraction to realism as they searched for a distinctive, national voice. Currently on display at the Gibbes Museum of Art in Charleston, S.C., in a version of the exhibition that comprises about one-third of the works represented in the exhibition catalogue, it shows the diversity of styles and techniques utilized by artists in the United States during the Great Depression and World War II. These artists illustrates the economic realities and social concerns of everyday life and both document a shared past and provided assurance during a difficult present. Artists featured in this exhibition include Paul Cadmus, William Gropper, Joe Jones, Rockwell Kent, Martin Lewis, Millard Sheets and John Sloan.

The American Scene on Paper will be at the Gibbes through March 22, then move to the Columbus Museum, Columbus, Ga., this summer, where it will expand to 101 works of art. The exhibition catalogue, which is now available for purchase from the museum shop or for resale at wholesale prices from the Department of Publications includes all 153 works, each reproduced full page and in color, and is a landmark publication for the museum, a truly important piece of scholarship and documentation. Please check back here for updates on the exhibition and catalogue. 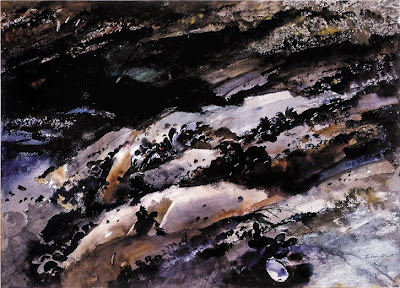 The New York Times article on Wyeth had this bit:

A minority opinion within the art world always tried to reconcile Wyeth with mainstream modernism. It was occasionally argued, among other things, that his work had an abstract component and was linked to the gestural style of artists like Kline, de Kooning and Pollock, for whom Wyeth expressed general disdain. It is true that especially some of the early watercolors of the 30’s and 40’s, in a looser style, inclined toward abstraction.

A watercolor in the collection of our museum serves as one example of the "gestural style" found in Wyeth's 1930s and 1940s images. Hupper’s Point, painted plein air in Maine, verges on the abstract, thus revealing an underlying tendency present in many of Andrew Wyeth’s works from the era. A landscape view of the tidal pools along a rocky coastline dissolves into bold compositional forms of grays and purples and browns. Purchased as a contemporary work of art by the Georgia Museum of Art's founder, Alfred Holbrook, Hupper's Point remains a prized object in the collection of the state's official art museum. 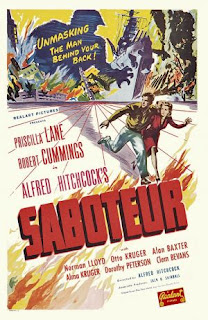 Both the "Athens Banner-Herald" and the "Red and Black" (the UGA student newspaper) recently ran articles about GMOA's Classic Film Series, which consists of four films directed by Alfred Hitchcock. Dr. Janice Simon, Josiah Meigs Distinguished Teaching Associate Professor of Art History in the Lamar Dodd School of Art, will introduce all of the films but the final one, providing artistic and historical context. The films will be shown in the M. Smith Griffith Auditorium at the museum at 7 p.m. on select Wednesday nights, and are free and open to the public (plus, they serve as blue card events for UGA students).

"The 39 Steps," one of Hitchcock's earlier films, made before he moved from England to Hollywood in 1940, has already shown, but there are still three left, and while it is difficult to select only four from among the dozens of films he directed, each of them brings something unique to the table.

"Saboteur" will be shown on Wednesday, January 28. It stars Robert Cummings as Barry Kane, a man accused of sabotage to an aircraft plant who escapes in order to find the real saboteur. Released in 1942, it contains what would come to be one of the director's trademarks: a scene set at or on a national landmark. Hitchcock set scenes in "North by Northwest" (1959) and "Vertigo" (1958) at Mount Rushmore and the Golden Gate Bridge, respectively, but even in 1929, with "Blackmail," which contains a climactic scene set in the British Museum, he was already using this trope. "Saboteur" comes to a head with a fight scene on the Statue of Liberty and is the director's first use of the device in his American films.

It also makes up a nice trilogy with the films he directed immediately before and after it. "Suspicion" (1941), which precedes it, stars Joan Fontaine as a naive woman married to Cary Grant, a con man. Fontaine's character slowly begins to suspect her husband is out to murder her for her money, and the film's suspense largely consists of wondering what steps she will take in response to this knowledge. "Shadow of a Doubt" (1943) is a similar story of family suspicion, this time focusing on a young girl who finds out her favorite uncle is a murderer. While "Saboteur" fits neatly into the classic model of Hitchcock as a director obsessed with the wrongfully accused, it also relates to "Suspicion" and "Shadow of a Doubt" as films that can be seen as influenced by the ongoing world war. "Saboteur" addresses wartime paranoia more explicitly, while the other two films focus on intrafamilial suspicions as a metaphor for the tensions always present inside a country during and in the run-up to war.