When Sam Thomas, curator of the T.R.R. Cobb House in Athens, first heard that Dale Couch was interested in spotlighting Georgia gunsmiths at the Georgia Museum of Art, it was music to his ears. After viewing long rifles on display at the Tower of London nearly 13 years ago, Thomas knew that exhibitions of that nature were well worth exploring and that the craft in Georgia has been overlooked for too long.

During a special Tour at Two on January 24, Thomas spoke to an interested crowd of two dozen individuals about the conception of “Artful Instruments: Georgia Gunsmiths and Their Craft,” which is on display at the museum through February 25. He noted that while many people see the guns on display as military pieces, he knew them to be “some of the earliest known forms of southern decorative arts,” and went on to classify them as “truly American works of art.”

The craftsmen of these works known by many names — mountain rifles, hog rifles, long rifles — were truly jacks-of-all-trades. The guns were used for sustenance as well as defense, and in some cases they were crafted with the intention of being presentation pieces awarded as trophies or prizes in local contents and fairs. Decorated with themes from the craftsmen’s cultures carefully and with precision, some rifles were even signed by the gunsmith himself.

Because Georgia’s gunsmithing history has long been ignored, this exhibition is an important acknowledgment of that record. Thomas took time specifically to acknowledge gunsmith Wiley Higgins, stating that Georgia can safely claim that one of their own was the “best long rifle maker in the world.” Higgins has multiple guns displayed in the exhibition, including a pistol whose nickname, “Precious,” somehow fits the firearm perfectly.

“Artful Instruments: Georgia Gunsmiths and Their Craft” is accompanied by a fully illustrated catalogue published by the museum (available for sale through the Museum Shop and on Amazon.com), and the exhibition is sponsored by the Community Foundation for Northern Virginia/the MOTSTA Fund, the Watson-Brown Foundation, the W. Newton Morris Charitable Foundation and the Friends of the Georgia Museum of Art.
Posted by Georgia Museum of Art at 9:00 AM No comments:

How Small is the World to Phillip Bond?

Do you remember the last time you said “It’s a small world”? Maybe it was when you ran into an old friend at Starbucks or found out that you share an acquiantance with a friend. For Phillip Bond, a security guard at the Georgia Museum of Art, that phrase carries a larger significance.

Recently, the works of Louise Blair Daura were on display at the museum. Coincidentally, Bond has some personal knowledge of her husband, Pierre. Known for their artistry and creativity, Mr. and Mrs. Daura were both excellent artists, and we asked Bond to tell us about his connection to them.

Can you tell us a little about yourself and your family? Where are you from?

I grew up in an art family. My father was a chairman at a small college in Virginia called Stratford College. He knew quite a few people in New York; he studied at Cochran University in Washington D.C., and in the 1940s he traveled to New York, where he met my mother who studied at Parsley School of Design. When I see the different artists being featured at the Georgia Museum of Art, like Clinton Hill, I get a particular connection. I feel like if my dad didn’t know him personally, he certainly would have known of them, including Pierre Daura. He was at Lynchburg College—a women’s college similar to Stratford.

What connection do you have to the state of Virginia? Were you born and raised there? Did you move because of work?

Yeah, I was raised there. My parents were in Brooklyn Heights when I was born. They had part of a studio for painters around the lower part of Manhattan. We moved to Denver when I was 2. There was a person named Harriet Fitzgerald, who graduated from Randolph-Macon Women’s College. She probably [knew] Pierre and Daura. But it was her and her sister, Ida Fitzgerald—who was the dean of Stratford College. They got my dad and mom onto the faculty.

Do you have a background in art?

I didn’t go to school for art. I have a master’s degree in Museum Education and worked for 16 years. In college, I did ceramics instead of drawing. I picked up drawing in the last few months, and with my terrible handwriting, I never thought I could draw. But being that my family is so proficient in art, I learned that my drawing skills are pretty genetic.

Did you realize that Pierre was Louise Blair Daura’s husband before now?

I think as I read the description of the show they brought her relation to Pierre Daura forward. I could also tell that she was from Virginia from her name “Louise Blair.” That’s a big Virginia name.

How does it feel to know that you knew the husband of the artist whose works are being hung in the museum? I would honestly think that it’s such a funny coincidence.

I never knew him personally, but when I see his work I feel there's a connection. There are also similarities between my mother’s and father’s work. My mom liked to do a lot of Post-Impressionist paintings, so I have a better appreciation for her work. I have them all hanging up in my house. Growing up, you see it—but to come into the museum and see other artists doing that same type of work…there’s just a feeling and a connection.

Posted by Georgia Museum of Art at 1:13 PM No comments:

Thinking Outside and Inside the Box: Clinton Hill Exhibition at the Georgia Museum of Art

On a typical Tuesday at the Georgia Museum of Art, Todd Rivers, Elizabeth Howe and their new intern Sara Katherine package up pieces from one exhibition to prepare for the next. The tacky snap of tape on cardboard creates a rhythm of productivity. As the sound echoes off the walls of the gallery, the building itself almost hums along to the tune. This activity is normal for the museum, as exhibitions rotate through these galleries about every three months.

Todd and Elizabeth, as preparators, organize this rotation to make sure the process runs smoothly and efficiently. Preparators work alongside curators and artists to create the best experience for museum visitors to see the works of art, which find their way to the museum. They decide how to frame, hang and label the works displayed in the museum.

Most recently, the museum’s director, William Eiland, organized an exhibition of the work of Clinton Hill, an abstract artist working in the 20th century. Rivers explained that Eiland charged him and Howe first to “transport the viewer into an alternate reality” and then to help the viewer “understand the purpose of abstraction without words.”

With these goals in mind, Rivers and Howe chose atypical methods for presenting Hill’s work. They responded to the jagged and freeform nature of Hill’s works by placing them in diagonal, tilted and even disjointed, lines. The orange lining of an artist-made box for a work titled “Duo,” an accordion-style book, inspired the complementary orange that accents the exhibition. Hill experimented with various techniques in papermaking, so techniques like glowing lightboxes and smooth wood tables highlight the three-dimensionality of Hill’s work. By understanding Hill’s “paper constructions” and not just two-dimensional paintings, this installation elevates the viewer to the realm of abstraction as an invitation to explore color, shapes and form alongside Clinton Hill.

Soon Todd and Elizabeth will box these works back up again. The walls will be painted. The future repurposed. And a new exhibition will fill the gallery. Before then, you do not want to miss the chance to see what reality you might find in Clinton Hill’s work.

Clinton Hill is on view January 6 – March 18, 2018 in the Virginia and Alfred Kennedy and Philip Henry Alston Jr. Galleries. 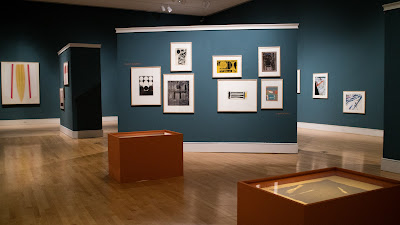 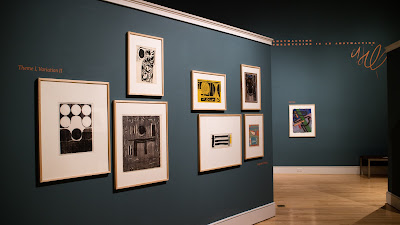