GMOA in the News

In case y'all missed our front-page appearance this weekend in the Athens Banner-Herald, here's the link to the fabulous article Lee Shearer wrote about the museum's impending reopening.
We also showed up in Art Daily, with an article on the reopening events, and snagged a big award from the Southeastern College Art Conference (SECAC), the release for which is showing up around the Internet.
Posted by Georgia Museum of Art at 2:24 PM No comments: 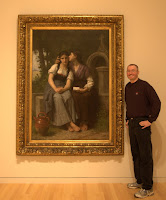 The curators, registrars and preparators at the Georgia Museum of Art have begun to hang art in the new permanent collection wing. Of course, it is all meant to be a visual surprise until the re-opening festivities in late January. But here is a quick sneak peek: 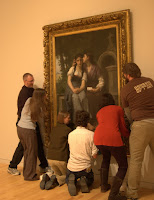 Last week, in the middle of our crazy move, was also the Collectors Holiday Party, which was held in Margie Spalding's beautiful home. Everyone had a wonderful time, and Tim Brown, membership director, took these photos to document the occasion. For more information about becoming a member of the Collectors, click here.
Stuck for an idea for a holiday gift? How about a Friends membership? Or an upgrade of someone else's membership to Collectors status? Friends memberships up to the family level are 20 percent off until we reopen January 29, and, unlike all that other stuff you're buying for your loved ones, won't take up any space. For information on purchasing a Friends membership, click here.
Posted by Georgia Museum of Art at 9:58 AM No comments:

While we were in the process of moving, hungry for art and happy to be back next to the Lamar Dodd School of Art, we hiked over there to check out the BFA exit shows for the students graduating this semester and snapped a few pictures. The current crop, which includes printmaking (including work by our own wonderful publications intern, Margaret George), fabrics, photography, jewelry/metals and graphic design, will be on display through December 13, so if you want to take a look at it in person (which we highly recommend), you'd better hurry.
Posted by Georgia Museum of Art at 9:23 AM 1 comment:

The Great Move Back

After about 18 months over on Jackson Street in the Visual Arts Building in temporary offices, the museum staff is, as of this week, back in our own lovely building and getting ready to open to the public. While we can't show you too many behind-the-scenes pictures, here are some of us frantically packing, moving and celebrating with our friends at the Georgia Review, who were across the hall from us there and were wonderful neighbors. Enjoy the slideshow below!
Posted by Georgia Museum of Art at 8:58 AM No comments:

“There’s no there there”: Stein & Co. Bring Picasso, et al. Back to the SF Bay 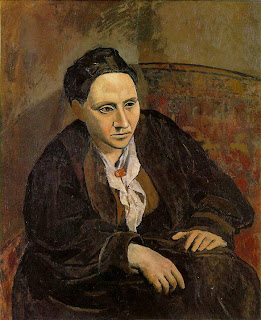 Perhaps Gertrude Stein would not make such disparaging remarks about her native Oakland, Ca., today, after the nineties migration of artists and hipsters priced out by the bulging tech bubble, but at the turn of the century Stein most certainly did not find Oakland to be the cultural Mecca for which she yearned. There was plenty of “there” – and everything besides – to be found in Paris, apparently, and so Gertrude and her brothers, Leo and Michael, the latter with his wife, Sarah, all joined the many American-in-Paris expats in 1903 and 1904. It was in Paris that Stein would meet her lifelong partner, Alice B. Toklas, write many of her Modernist literary masterpieces and, in collaboration with her brothers, begin building one of the most impressive and influential art collections of the 20th century.

The Steins had a taste for the avant-garde, and collected what would become important works by such now-famous artists as Cézanne, Matisse, Picabia and Picasso, whose famous portrait of Stein hangs in New York’s Metropolitan Museum of Art. They were not only collectors, but avid promoters and even close friends with some of these artists. Gatherings of artists and writers at Michael and Sarah’s apartment led to their famous Saturday evening salons, and Gertrude and Alice’s apartment at 27 rue de Fleurus eventually became so frequented by admirers of their painting collection that they had to set specific visiting hours for their home-cum-museum so that Gertrude could write without interruption.

The Steins’s collections have been culled for an exhibit that will begin near their childhood home, at the San Francisco Museum of Modern Art, in May of 2011. After it finishes its run at SFMoMA from May 21 to September 6, 2011, “The Steins Collect: Matisse, Picasso, and the Parisian Avant-Garde” will move to the Grand Palais, Paris (October 3, 2011, through January 20, 2012) and the Metropolitan Museum of Art, New York (February 21 through June 3, 2012). This exhibition incorporates new scholarship and highlights the various emphases of the three collections, Leo’s, Gertrude and Alice’s, and Michael and Sarah’s, and provides extensive archival materials documenting the historical importance of the family’s collection, including Michael and Sarah’s introduction of Matisse to American viewers on their move back to the Bay Area in 1935, the same year SFMoMA was founded.

Posted by Michael Tod Edgerton at 1:00 PM No comments:

Art Around Athens (and Beyond) 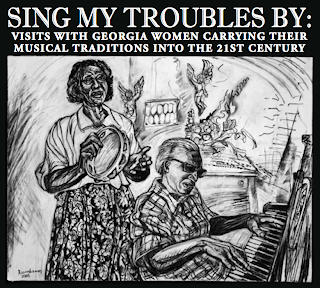 Mark your calendars for this coming Monday (December 6), at Ciné in downtown Athens, where Neil Rosenbaum, son of the artist Art Rosenbaum, will be at a special screening of his new feature documentary, "Sing My Troubles: Visits with Georgia Women Carrying Musical Traditions into the 21st Century." Art is also featured in the documentary, visiting these musical artists and talking with them about their memories and life experiences. The film will show at 5 and 7:30 p.m., with a live musical performance (including some of the folks featured in the movie) at 6:30 p.m., and a Q&A with Art and Neil following the later screening. Admission is $12. GMOA patrons may remember that Neil also made a documentary about his father that accompanied his exhibition at the museum in 2006-7 and is included with the exhibition catalogue, "Weaving His Art on Golden Looms: Paintings and Drawings by Art Rosenbaum."
Posted by Georgia Museum of Art at 8:31 AM No comments: 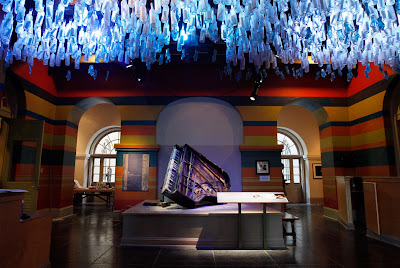 Situated on Jackson Square in the French Quarter, the Louisiana State Museum has recently opened an exhibit that documents Louisianans’ survival of hurricanes Katrina and Rita, as well as the science of hurricanes. "Living with Hurricanes: Katrina and Beyond,” in the words of museum director Sam Rykels, “documents the human struggle in the face of a natural disaster, incorporating everything from survivors' personal mementos to their thoughts and feelings.  It documents how the recovery has brought about innovations — turning the region into a laboratory of new ideas.”

As Art Daily reports, “Galleries and connecting areas move visitors through four major presentations: New Orleans' relationship to storms; firsthand accounts of people and predicaments of survival they found themselves in; a forensics gallery exploring the paths Katrina and Hurricane Rita took that year and the science of how the levees failed; and a final section on recovery and the technologies emerging since to combat the destructive forces of nature.”

One of the biggest draws will undoubtedly be Fats Domino’s damaged baby grand piano, rescued from his 9th ward home. “Living with Hurricanes” includes many other displays as well, ones with less significance for rock ‘n’ roll history, but with more affective force. For instance, the collection includes the journal a man kept while trapped in his house during the storm, which he wrote with a felt marker on his walls, and a pair of jeans another man wore with his and his wife’s names and the name and number of the hotel to which she had evacuated while he stayed behind, so that she could be contacted in the event of his death.

The exhibition opened in October, and includes online galleries of Katrina photos and personal stories.

Posted by Michael Tod Edgerton at 12:53 PM No comments: