Not many artists easily use rubber in their work (except for rubber cement, in most cases). Chakaia Booker, however, has gained fame for her incredible pieces sculpted out of her go-to medium: car tires.
On the rim of a wheel, tires don’t appeal much to the eye, if at all—as long as all four are inflated, I’m good to go. Otherwise, they’re probably the last thing on my mind, least of all for an art project. For Booker, the opposite rings true. Her imposing yet magnificent pieces exhibit a fluidity that seems almost alien, pushing at the boundaries of the real in an artistically meaningful manner—who would have thought of morphing something as crudely made as a tire into a structure that mimics the natural contours of a human spine? By using a material so out of left field in such a manner, Booker makes a name for herself not only as an artist, but as an innovator. 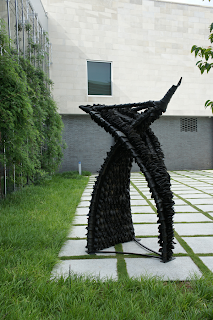 Booker’s work is in collections ranging from the Atlanta Botanical Gardens to the Metropolitan Museum of Art to NASA. GMOA is lucky enough to have a special exhibition of her pieces in the Jane and Harry Willson Sculpture Garden, where they will remain until next April.
Posted by Unknown at 5:24 PM No comments:

Albrecht Dürer: From Germany to Georgia

Germany’s biggest exhibit of works by the German artist Albrecht Dürer opens at Germanisches National Museum on May 24, 2012. Fifty-one lenders from 12 countries sent 120 of Durer’s most important works to Nuremberg, Germany.

The exhibition spans from his oldest work, from 1484 (a self-portrait from the Albertina in Vienna), to “Adoration of the Magi” (1504), from the Uffizi in Florence. His most outstanding works appear in a collective exhibition that illustrates his self-portraits and portraits of his family and friends, his ambitious nature studies and dramatic narratives as well as drawings and panel paintings.

GMOA will also have a special exhibition on display featuring Dürer’s work from June 16 until August 12, 2012, in conjunction with the temporary exhibition "A Divine Light: Northern Renaissance Paintings from the Bob Jones University Museum & Gallery.” The exhibition, titled "Dürer and His Legacy" will highlight his naturalistic works that suggest depth and texture using only the black lines of etching, engraving and woodcut. Perhaps the greatest of the Northern Renaissance artists and one of the most accomplished printmakers in the history of Western art, Dürer left a legacy of work that can be enjoyed all over the world.
Posted by Kat Drerup at 11:43 AM No comments: 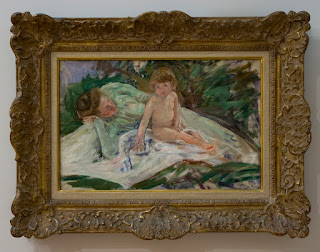 Mary Cassatt was born (May 22) in 1844. She was an American painter and printmaker best known for her Impressionist work. At the age of 15 she began studying painting at the Pennsylvania Academy of the Fine Arts despite her father’s objection to her becoming a professional artist. She then moved to Paris in 1866, where she began her study with private art lessons in the Louvre. Here she befriended Edgar Degas. Regarded as the one of the founders of Impressionism, he had significant influence on Cassatt’s etching work. She also became proficient in the use of pastels, and many of her most important works are in this medium.  Her increasingly poor eyesight virtually put an end to her serious painting, and she died in 1926.

Cassatt's popular reputation is based on an extensive series of rigorously drawn and tenderly observed images of the private lives of women with an emphasis on the intimate bonds between mother and child.

Our Digging Daura series spotlights interesting finds from the Pierre Daura Archive in GMOA's Pierre Daura Center, part of our Study Centers in the Humanities. This installment of the series comes from Daura Graduate Intern, Joan Tkacs:


Pierre Daura already has an impressive resume– father, artist, teacher, soldier– to this list I would like to add another entry, amateur archaeologist. I came across a story of how the Daura family discovered Neolithic artifacts outside of Saint Cirq in a letter written by Louise Daura to her family. Louise’s story made for such good reading that I thought I’d recount the tale for all of you.
This adventure begins with a birthday party. Pierre and Louise’s daughter, Martha, was born September 24, 1930 and the Dauras held a special party for Martha’s first birthday on September 27, 1931. During the birthday festivities, the Dauras were visited by Maurice Olombel, a friend of Pierre and a scientist at the station entomolique de Versailles. After everyone had their fill of the traditional birthday cake, Pierre convinced his friend to take part in a small excavation outside of the village of Saint Cirq. Generations before, a villager was said to have discovered an ancient Dolmen, and found coins, jewelry, and pottery from what many believed to be a “Gallo-Roman” grave. The site had not been explored further, and Pierre Daura hypothesized that an even older tomb might be located underneath the ancient gravesite. Olombel agreed to join the Daura family as their guide and advisor when they searched for the dig site and conducted their own excavation.
The Daura troop departed the next morning. They did not have proper digging equipment so they used tools from their garden as substitutes; trowels and a hoe replaced the more traditional shovels and pickaxes, and Louise carried a bundle of fresh diapers for the baby Martha. According to Louise’s letter the party descended into the Lot Valley, crossed the river, and eventually arrived at a plateau where Pierre discovered a circular pile of stones about twenty-five feet in diameter. After breaking for lunch, Pierre and Olombel began to dig up the site.
The men were “up to their necks” in dirt when they finally found a large stone slab, which they believed served as the floor of the newer “Gallo-Roman” tomb and the roof of an older Neolithic grave site. Using what must have been Herculean force the two men lifted up the stone slab and continued to dig. The Dauras’ efforts were rewarded. They found teeth, various bones including a vertebra, an arrowhead, and pottery shards. Olombel was so impressed with the findings that he took them back with him to Paris, intending to show them to his colleague Abbé Henri Breuil, the authority on Neolithic settlements in both France and Spain.
I had come to feel pretty familiar with the happenings of the Daura household after reading through Louise Daura’s family correspondence, but her account of this amateur excavation still managed to surprise me. If anything, her story is a testimony to the family’s unflagging sense of adventure and the influence this adventurous spirit had on their day-to-day life. 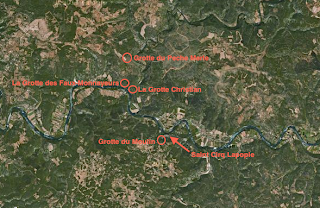 Map of Saint Cirq in relation to several prehistoric caves in the area
Posted by Lynn Boland at 10:31 AM No comments:

Today (May 11) in 1904, the legendary Surrealist artist Salvador Dalí was born.

This week’s Weekly Work spotlights Dalí’s advertisement for Bryans Hosiery, featured in the exhibition “Pattern and Palette in Print: Gentry Magazine and a New Generation of Trendsetters.”

Dalí’s ad signals the artist's role in the intersection of fine art and the commercial world. Dalí also designed the cover of the Fall 1950 issue of American Fabrics magazine, Gentry’s sister publication, and produced textile designs for curtains, rugs and neckties for the mass market and designed covers for Vogue and other magazines. “Pattern and Palette in Print: Gentry Magazine and a New Generation of Trendsetters” is on view through June 17, 2012, in the Dorothy Alexander Roush and Martha Thompson Dinos Galleries. 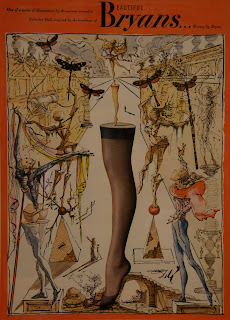 The following post comes from Amy Arnold, a curatorial intern in my department who will be graduating this summer with a BA in Art History and a BFA in painting. 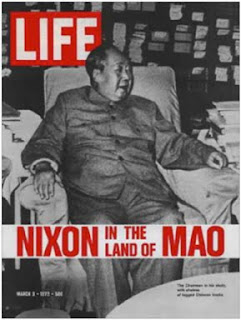 In preparation for an exciting exhibition opening at GMOA this August, some of my fellow interns and I have been researching the collection of prints known as the “New York Collection for Stockholm” portfolio. The portfolio was created as a fundraising initiative in 1973 to make it possible for the New York-based group Experiments in Art and Technology (E.A.T.) to donate a collection of American contemporary art to the Moderna Museet in Stockholm. The E.A.T. initiative focused on collaborations between artists and engineers in an effort to stimulate inventive technological growth and to explore creative applications of technology.

Of all the research we have done on the portfolio, perhaps our most exciting find concerns a print by Andy Warhol. Known for his fascination with fame, Warhol had begun using Mao imagery in his work after the Chinese dictator was referred to as the most famous person in the world in a Life magazine article from 1972. That same year, the artist began creating his Mao portraits, which were based on the leader’s official Chinese state portrait.

Before GMOA acquired its own copy of the portfolio, all that we knew about the Warhol came from the captions and labels produced by other museums that owned the print; almost no scholarship exists on it. What we generally understood was that it was an image created by Xerox copying. You can imagine our surprise when this is what we found upon opening the portfolio for the first time. 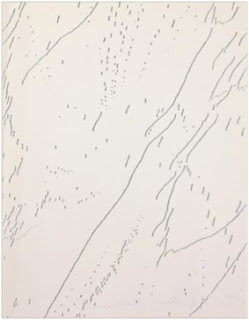 It resembles nothing of Mao—at least at first glance. Somewhat confused, we continued our research. As we delved deeper into the imprints in the collections of other museums, we discovered that, in fact, only a handful of the impressions actually resembled the Chinese dictator at all. The typical description of the work’s medium is “sequentially reproduced Xerox print,” meaning the prints were created by making a copy of Warhol’s original drawing of Mao, then using that copy to create another copy, and so on, degrading the clarity of the original image with each copy. We also discovered that the image was being distorted in two other ways: through enlargement and rotation. This distortion is evident in a side-by-side comparison of several editions of the Mao print. 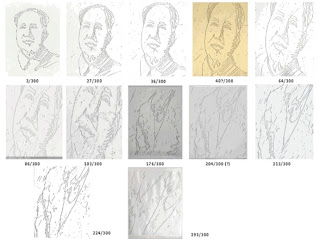 The edition numbers shown here are from the portfolios that were sold to the public in order to raise funds for the New York Collection at Moderna Museet. GMOA’s edition of the print is somewhat special. It comes from an edition numbered only to 31, which were reserved as publisher’s copies and were not initially for sale. For that reason, the GMOA Mao print, numbered 22/31, is even more distorted than edition 293/300, above. By collecting these images of other Mao editions, we were able to determine that GMOA’s print is a close-up and rotated view of Mao’s upper lip, just under his right nostril.