The annual Athens Convention and Visitors Bureau meeting featured a lot of numbers, facts and figures, but what really stood out to the audience was guest speaker Lisa Love’s less quantifiable assessment of the city. Evoking the sentiments of Elizabeth Barrett Browning, Love began to “count the ways” that Athens held a special place in her heart.

She began by listing the various businesses, attractions and destinations in Athens that had added to her enjoyment of the city, with Avid Bookshop, the State Botanical Garden of Georgia, Jittery Joe’s, Nuçi’s Space and the Georgia Museum of Art being but a few of the highlighted spots.

She said she loved “how you drive into downtown and you just feel different . . . that you don’t forget those who aren’t with you anymore . . . that when [Ciné] needed your help as a community, you were there for them . . . and that Athens is a place that appreciates, loves and nurtures art.”

Love, the director of the Tourism Division of the Georgia Department of Economic Development, ensured that the audience knew that she had experienced Athens as a loyal, repeat visitor, and she highlighted how the hospitality of the Athens tourism community made her time in Athens stand out. “I’ll be back,” she emphasized, “and you all did that.”

Following this love letter to the Classic City, six individuals were recognized with Athens Hospitality Awards. The winners included Richard Mikulka, Joni Robinson, Paul Martin, Mike Waldrip and Mayor Nancy Denson. One award was extra notable for the Georgia Museum of Art, as our very own Michael Lachowski was honored as the Partner of the Year. Lachowski was praised as a Renaissance man of the community, who is present for meetings across the state without fail and has been a pillar of the Athens area for many years even before working at the museum.

The numbers presented in the meeting were impressive — over $300 million in tourist spending, nearly 3,000 tourism jobs in the county and an average of $850,000 spent by visitors each day in Athens. When recognizing the work of the CVB staff and tourism industry in the city, it is hard to summarize appropriately the hard work and achievements that attraction and hospitality workers have accomplished. But one thing that the room could agree on was Lisa Love’s parting sentiment: “Athens, I really do love you.”

--
Taylor Lear
Department of Communications
Posted by Georgia Museum of Art at 9:00 AM No comments: 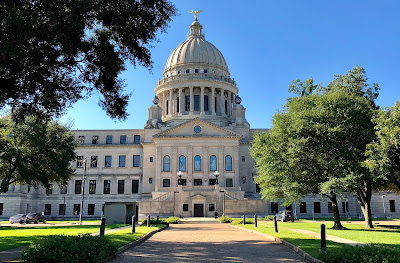 One traveling exhibition on view at the Mississippi Museum of Art was “Central to Our Lives,” which was most recently on view here. Michael Lachowski, who attended the conference, commented, “It was fun to see [the show] in a totally different configuration.” He also enjoyed the show of contemporary art by Jeffrey Gibson, “Like a Hammer,” on view through January 27, 2019. Director William U. Eiland was also happy with the conference, stating, “I was impressed by the hospitality and generosity of our hosts—the museum community—in Jackson.”

The conference also presented many sessions for attendees over its three days. “Talking Race: The Power, Influence and Responsibility of Museum Professionals,” “IGNITE SEMC: Inspired Professionals Speak” and “Museums Rise Up with Creative Funding” were but a few of the options from which attendees could choose.

The Georgia Museum of Art left the conference with more than new information and skills. We were awarded two awards in publications design and two for exhibitions. The museum’s quarterly newsletter, Facet, designed by Athens firm The Adsmith, took home the gold in the Newsletters and Calendar of Events category. “Clinton Hill,” an exhibition catalogue that surveyed the artist’s career as a printmaker, painter and pulp-paper pioneer received gold in the Book and Catalogues category and was designed by Almanac, in St. Louis, Missouri.

The museum also received awards for two exhibitions. “Crafting History: Textiles, Metals and Ceramics at the University of Georgia,” which included works by dozens of UGA faculty members, received a gold award. The museum received a bronze award for “Modern Living: Gio Ponti and the 20th-Century Aesthetics of Design,” an exhibition that presented more than 50 objects, representing some of Ponti’s most outstanding pieces of furniture and decorative objects.

The Georgia Museum of Art has impressive holdings of 20th- and 21st-century wood art thanks to the expansive gift of Jane and Arthur Mason a few years back. Despite its wide variety of craft, the museum did not have an example from prominent artist Douglas Finkel until a recent gift by the Center for Art in Wood.

Finkel is known, in part, for a series of benches, of which he has created 42 since 1997. French designer Pierre-Emile Legrain (1889–1929), who introduced these African forms to Western culture in the 1920s, is a noted influence of Finkel. According to the artist, “[Source bench’s] form and surface detail are inspired by Japanese architecture and, in particular, Samurai helmets.” The example recently added to the collection is an exemplary expression of this series. The recently acquired work has legs that are painted and carved, with a wire-brushed, painted and inlayed seat with kente cloth. Finkel has been both a woodworking artist and teacher for the past 21 years, and his work can be found in a number of collections, including the Renwick Gallery of the Smithsonian
American Art Museum.

We sincerely thank our friends at the Center for Art in Wood as well as the original donors, Bruce and Marina Kaiser, for this gift. It serves as a wonderful addition to our decorative arts holdings, filling an important gap in our collection.

Posted by Georgia Museum of Art at 10:08 AM No comments:

Richard Hunt’s career has spanned six decades, and although the artist is now in his 80s, he continues to create large-scale public commissions. The sculptor’s work will be on view at the Georgia Museum of Art from October 20 through February 3 in the exhibition “Richard Hunt: Synthesis.” The show, which was organized by Larry D. and Brenda A. Thompson Curator of African American and African Diasporic Art Shawnya Harris, draws from public and private collections all over the country. It will feature several sculptures and works on paper that trace the various phases of Hunt’s career, including welded and cast sculpture dating from the 1950s to the present and models he made after his transition to large-scale public commissions in the late 1960s.

Hunt’s earliest work is tied to his time at the Junior School of the Art Institute of Chicago, and later the Art Institute. The Museum of Modern Art in New York played a role too, when it presented a retrospective exhibition of his career in 1971 and purchased some of his early work. Of particular interest for Georgians are “Wisdom Bridge,” which Hunt created for the downtown branch of the Atlanta Public Library and a pair of sculptures (“Tower of Aspirations” and “And They Went Down Both into the Water”) for Augusta’s Springfield Park.

“Richard Hunt: Synthesis” will be accompanied by a number of related events throughout the fall at the Georgia Museum of Art. The exhibition will also serve as the focus of the museum’s 5th-grade tours as part of Experience UGA this year, allowing all 5th-grade students in the Clarke County School District to experience the works of a pioneering African American sculptor.

Other related programming for this exhibition includes:

All programs are free and open to the public unless otherwise indicated.
Posted by Georgia Museum of Art at 9:00 AM No comments: