This week’s Weekly Work, titled “Lagoon,” comes to you from the Georgia Museum of Art’s new exhibition “Palette and Pattern in Print: Gentry Magazine and a New Generation of Trendsetters.” This image was on the cover of Gentry in the winter of 1956–1957, the second-to-last published of the magazine. The work comes from Jazz (1947), a book of about 100 prints based on paper cutouts by Henri Matisse.

Matisse created the images for Jazz between 1944 and 1947. In his late 70s, the artist’s failing eyesight made drawing and painting with a brush or pencil difficult. He turned to cutting simple images from brightly colored paper painted with gouache and arranging them on another sheet of paper. The term “gouache” refers to a specific type of paint consisting of pigment, a binding agent (such as gum arabic) and an inert material designed to make the paint opaque. The resulting style is similar to watercolor but in a much more opaque medium.

Jazz features images that focus on theatre or circus subjects. “Lagoon” is an obvious departure from this commonality, with its distinctly nautical theme. The deep, bright blue at the top of the work is clearly reminiscent of the sea, with underwater life below. The black, branching shape reminds the viewer of lengthy tendrils of algae, and the white and red shapes call to mind coral reefs. The murky green color is a departure from the color scheme of the rest of the work, as it lacks the brightness of the red, white and blue and the depth of the black. Anyone who has ever opened his or her eyes underwater will recognize the difficulties of seeing in that situation echoed in the green Matisse chose. The wavy, abstract qualities of the shapes in this piece also call to mind the idea of underwater sight. The viewer almost feels as if Matisse were trying to give him or her a snapshot of life in a lagoon.

Gentry Magazine was published for a relatively short six years. During that time, its publisher William Segal’s goal was to create a magazine for the “top 100,000 thinking men” in the United States. The magazine sold for $2 an issue at a time when the average magazine price was 25 cents. The difference in price was due to the luxury the producers of Gentry wanted its readers to feel when perusing the magazine. Fabric samples, booklets and, once, a sample of oats accompanying an article on horse care were incorporated into the magazine. Some issues were published in hardback and featured high-end paper. The goal of the magazine was to engage intelligent men on topics such as literature, art, classical music and other such gentlemanly things.

Fabric design students in the University of Georgia’s Lamar Dodd School of Art were given an assignment to create a pattern and a master color palette drawing inspiration from the men’s magazine. Each student created a storyboard combining images from Gentry and modern-day sources of inspiration. The results were digitized and printed on paper. They are currently on display as part of “Palette and Pattern in Print,” as is content from the pages of Gentry to contextualize the students’ inspiration and the trends popular during that time period.
Posted by Kayla Murphy at 10:33 AM No comments:

Instagram has become incredibly popular for smart phoneusers. The app allows the user to put pictures through a variety of filters tocreate different tints and shading techniques. The founders of Instagram citePolaroid cameras as their inspiration for creating the app. As they say ontheir website “When we were kids we loved playing around with cameras-- we loved how all the old Polaroid cameras marketed themselves as “instant”(something we take for granted today). We also felt that the snapshots peoplewere taking were kind of like telegrams…-- so we figured why not combine thetwo?”
Of the two pictures below, one was taken with a film cameraand one was taken on an iPhone 4 using Instagram. Can you tell the difference? 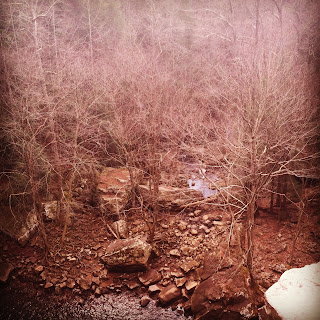 If you guessed that the one on top is the film photo, you were correct! Not being a photographer myself, I find it difficultto differentiate between a film camera and a photo filtered through Instagram. Sullivan Roger Davis, the photographer of the above film picture, used a Leicaflex SL with lomography red scale film 501SO. TheLeicaflex SL model was only produced between 1964 and 1976. The photograph wasintentionally taken on the wrong side of the film. Davis’s explanation for this technique was because “by shooting through the emulsion, everything takes on ared tint, so it looks as though it's redscale, but it's actually an effect only captured on film, not a filter.” This technique and extensive knowledge of not only photographic technique, but also the chemical and mechanical processes of photography are lost on strictly Instagram users.
Instagram, however, can evoke an emotional response in the same way that a film photo can. Filters can distinctly change the way the viewer interacts with the photo. Consider the two pictures below. 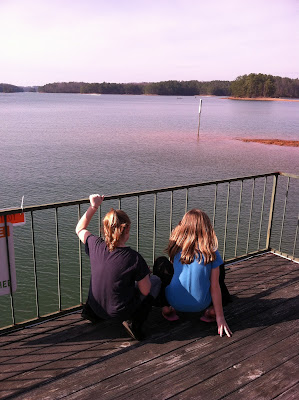 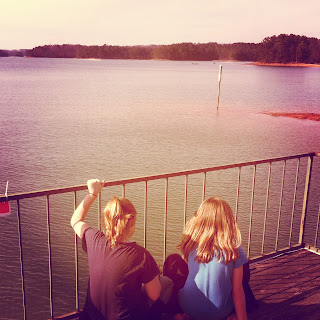 The one on the top is my younger sisters playing at a lake. The one on the bottom is the same photograph filtered through Instagram. For me as a viewer, the bleached tones of the filtered picture make it seem aged. One seems to be looking through it into years past. It conjures childhood memories of summer time, relaxation and childhood fun. By saturating the picture with light, the photo appears to have been taken on a brilliantly sunny day. In reality, the day was quite cloudy. While the picture on the left does evoke a similar emotional response, it is not as significant as the one provoked by the Instagram-filtered picture.
Many of the editing techniques available on Instagram were previously only available to those with certain kinds of film or advanced photo-editing technology. Even then, those with the equipment to create such distinct effects needed a keen eye for color and shading in order to achieve the desired effects. Instagram has successfully removed the need for thephotographer to have any knowledge of photographic arts. The most basic pictures become ‘artsy’ when given an Instagram filter.
Perhaps in response to the layman’s adoption of advanced photographic techniques, a new type of photography is being pioneered. Panography is a form of collage. Pictures are taken of the same panoramic view and brought together to provide an accurate representation of how the eye sees. David Hockney is an important pioneer in this field. He began making his “joiners,” as he called them, in 1970. One of his earliest was a photomontage of his mother, titled “My Mother, Bolton Abbey, 1982.” Hockney was fascinated with the way the compiled photographs created a narrative. This style of photography has been likened to Cubism due to the abstract way it treats shape and color.
Posted by Kayla Murphy at 3:10 PM 2 comments:

The spotlight is on Charlie Lucas’s “Girl with Balloons” for this Weekly Work! The sculpture was made entirely out of scrap metals Lucas found in junkyards and was created primarily through welding techniques.

Lucas, affectionately dubbed “Tin Man,” was born to a family of 14 children in 1951 in Autauga County, Ala. Throughout his childhood, he was passionate about making toys out of household materials. Lucas discovered his love for working with metal from his father, who first taught him how to take apart and reassemble a car engine. Lucas left home at age 14, traveling as far as Florida, picking up odd jobs along the way.

At the age of 20, Lucas returned home to Autauga. There he reunited with his childhood love, Annie Lykes. In 1991, Lucas said, “I grew up with Annie. I always told her that I would come back and get her when I got an apartment. In 1971 I came home and got her. Here we are twenty years later.” The pair wed shortly thereafter and had six children of their own.

In 1984, a work-related injury to his back left Lucas bedridden for a year, with little opportunity to generate income. A deeply religious man, he prayed for the ability to do something no one else could. Through prayer, he found inspiration to return to metalwork. His first creation was a new mailbox, when he tired of receiving misdirected mail. The sculpture was a towering metal man holding a mailbox under his arm, and its success gave him the needed encouragement to create new works, from towering figures nearly 10 feet tall, to minute men measuring only a few inches.

“Girl with Balloons” is constructed in Lucas’s typical style. He found a variety of junk pieces and scrap metal, and welded them together into something beautiful. Elements from bicycles and car engines are evident in the work. The balloons are fashioned from bicycle wheels and the base she stands on is an old car wheel. Lucas said in a 1991 interview that he views his art as “making toys” and without that approach he would not know what he was making. Such a whimsical view is evident in this piece, as the girl clutches the balloon strings in the crook of her elbow. Given that Lucas has six children of his own, it is easy to see how he could have derived inspiration from his own family life for this sculpture.

Lucas continues to sculpt and paint. He has recently been honored as a guest lecturer at Yale University and his work has been featured in many exhibitions. Lucas still lives and works in Autauga. Check out the interview series above on Youtube for more information about Charlie Lucas!
Posted by Kayla Murphy at 3:35 PM 1 comment:

"Pattern and Palette in Print" installation 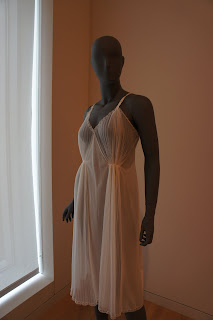 We're practicing with our new camera, and the ongoing installation of "Pattern and Palette in Print: Gentry Magazine and a New Generation of Trendsetters" (opening March 17, with a reception March 23) seemed like a good subject. This exhibition is so ripe for Pinterest! 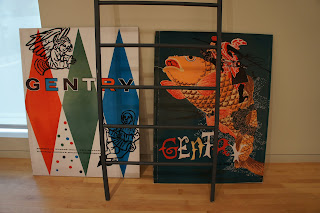 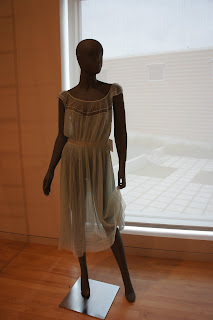 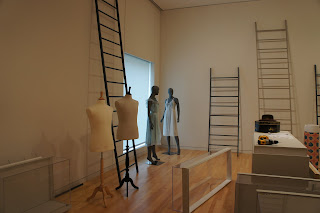 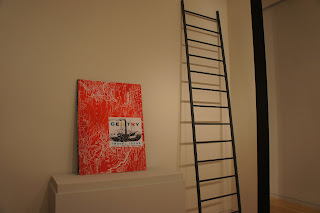 Posted by Georgia Museum of Art at 12:50 PM No comments: