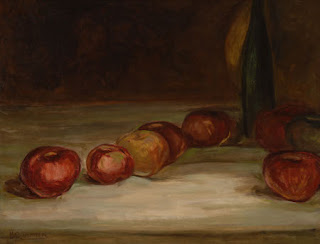 Henry Ossawa Tanner (1859–1937), an African American artist, was known internationally for his paintings that focus on spirituality and imagination. The son of a minister, Tanner often depicted biblical scenes, utilizing both his academic training and what he saw on his visits to the Middle East and Africa.

Tanner was born in Pittsburgh, Pennsylvania, before the American Civil War. He enrolled at the Pennsylvania Academy of the Fine Arts (PAFA) in 1879, where he studied under Thomas Eakins. After Tanner made his debut in New York and opened an art studio in Philadelphia, he moved to Atlanta in 1889, initially to open a photography studio. His business was unsuccessful, but he later taught a course in drawing at Clark College (Clark Atlanta University). He would move to Paris the next year, due to racial discrimination in the United States. Tanner enrolled in the Academie Julian in Paris in 1891, studying under Benjamin Constant and Jean-Paul Laurens. He developed a looser, more poetic painting style in 1900, with which he rendered his travels around the world (Egypt, Algiers, Morocco, Jerusalem, etc.). Tanner made these journeys so that he could portray biblical figures and settings accurately.

The artist’s involvement in World War I and his wife’s death, in 1925, led him toward depression and altered his perspective on art in his later years. He would create less work that focused on biblical themes and more paintings of the war and portraits of African Americans such as Booker T. Washington; these later paintings stayed in his private collection. Tanner’s influence on other artists, especially African Americans, was notable, and he received many awards over the course of his life.

The Georgia Museum of Art owns a painting by Tanner, “Still Life with Apples” (1890), donated to its collection by Larry D. and Brenda A. Thompson (along with other works of art by African Americans). Created before Tanner left the United States, it uses dark colors in the background to emphasize the light on the apples in the foreground. Other works by Tanner are in the collections of the Smithsonian American Art Museum; the Museum of Fine Arts, Houston; the Des Moines Art Center; the Cincinnati Art Museum; PAFA and many more.

Posted by Unknown at 9:00 AM No comments: 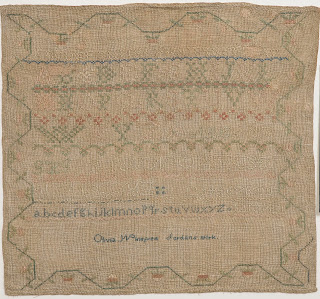 Olivia Winifred Jordan's Sampler
In around 1828, a young girl, born in 1818, made a sampler that will be a part of the upcoming exhibition "Georgia's Girlhood Embroidery: 'Crowned with Glory and Immortality,'" which will run from October 31, 2015, to February 28, 2016 at the Georgia Museum of Art. Her name was Olivia Winifred Jordan, and she lived in rural Washington County, Georgia.

Like many young girls of the 18th and 19th centuries, she made an embroidery sampler to demonstrate her needlework skills and her literacy. It contains multiple kinds of marking alphabets, many different kinds of decorative geometric bands and a strawberry border that goes around the entire sampler, which are all utterly commonplace to schoolgirl samplers in the late 18th and early 19th centuries. In this sense, the surviving sampler is a relic of the system of girlhood education common in a bygone era. Olivia could have been trained in these skills at any one of the many female academies in Georgia, or, most likely, at home by her own mother.

In another sense, her sampler offers us a glimpse into her unique world. She proudly prints her whole name as "Olivia Winefred Jordan" on the bottom of her sampler. Genealogical research reveals that she was named after both her maternal grandmother, Olivia Bell, and her paternal grandmother, Winifred Jordan. Further research on the family reveals that it was large, extended and close-knit and that family members frequently moved long distances to live with their relatives, a pattern that promoted the entire family's unified migration across the South over the generations. Olivia's sampler clearly reflects this family-centered identity. It also reflects the common way in which samplers and other forms of schoolgirl embroidery were often used to communicate social, political, familial and religious messages.

Olivia's sampler, then, represents a microcosm of the world that she inhabited, both as a member of her family and as a white middle-class schoolgirl in the antebellum southern United States. It is both a work of folk art and a statement of social identity and is therefore valuable to both those who appreciate art and those who study social history. Those interested in delving more deeply into this topic should take time to visit the museum when the exhibition will be on display. A kit that contains the chart and the material necessary to replicate Olivia's sampler will also be on sale at the Museum Shop during the duration of the exhibition.

Posted by Unknown at 4:51 PM No comments: