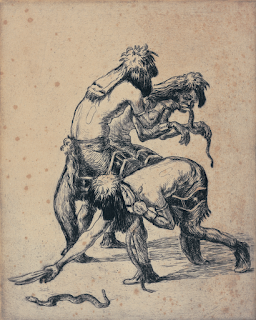 With the opening ceremonies of the 2012 Olympic Games due to air tonight, we were interested to see this article from Smithsonian.com on the history of arts medals given out at the Olympics. Although they were only given out from 1912 to 1952, and somewhat spottily at that, the idea that arts could stand alongside sport in international competition is one not often contemplated. Wikipedia has a listing of all the medals awarded, and many of the names are not familiar. One, though, is that of Mahonri Young, who received a gold medal in the "statues" category in 1932. The grandson of Mormon pioneer Brigham Young, he worked in engraving and watercolor as well as sculpture. The image pictured above is his etching "Hopi Snake Dance" (ca. 1924), which is on long-term loan to the Georgia Museum of Art from the collection of Jason Schoen. Some of Young's most well-known works are the painted sculpture dioramas he created for the American Museum of Natural History in New York. This etching most likely relates to that project and probably resulted from the many sketches he made on a research trip to the American Southwest.
Posted by Georgia Museum of Art at 11:20 AM No comments:

It’s been a fulfilling summer here at the Georgia Museum of Art. We’ve had exhibitions come and go, interns who have started and departed and events and parties throughout. As July winds down and August looms around the corner, what can we expect from the GMOA this coming autumn? After all of the amazing art in only a summer, what more can the museum show?
While our permanent collection remains as impressive as ever in its cohesive survey of artists ranging from Americans of the Roaring ‘20s to those of the Italian Renaissance, and Chakaia Booker’s statues remain in our sculpture garden, GMOA has a few more tricks up its sleeves that are bound to wow. We’re going to hit the ground running on the very first day of August, as we’ll be installing George Beattie’s controversial agriculture murals, which will be on display through Jan. 7, 2013. What else do we have, you ask?  On August 18, we’re going to open not one, but three exhibitions to the public. First, we have “Francisco de Goya's 'Disasters of War',” which features all 80 prints from the master's series. Second, we have “The Epic and the Intimate,” a collection of French drawings dating all the way back to the late 1600s, on loan from the Snite Museum of Art at the University of Notre Dame. Third, and this should really knock your socks off, the GMOA has made a recent purchase, and quite an incredible one at that, in “The New York Collection for Stockholm Portfolio,” a collection of prints compiled in the 1970s for a joint project between the artists and engineers of New York and the Moderna Museet in Stockholm, Sweden. The cherry on top that makes this acquisition so special? The edition we purchased was an original publisher’s proof, meaning it was never meant to go into stores with the other 300 copies. All of this is just in August—this summer was just a taste of what we have in store. There’s plenty more coming, so stick around!
Posted by Unknown at 8:21 AM 1 comment:

Art for the Family

In my experience, I’ve noticed that individual members of a family tend to have different tastes in art. I personally enjoy looking at the work of Salvador Dalí and John William Waterhouse, while my sister prefers Claude Monet’s paintings. We do share similar tastes in music and books, but paintings and sculptures are things we’ve always had different opinions about. On a simpler level, this difference in artistic taste can be something as easy as one child liking a blue jacket with a green circle on it, while his or her sibling prefers one with a yellow circle on it.
We’re happy knowing that the works in GMOA’s collection inspire family debates and discussions, and, as much as we enjoy hearing different interpretations, we’d also like to have families bond over their similar pleasures in art. So, for Family Day on July 21, from 10 am to noon, we’re inviting families to have a look at the southern folk art from our permanent collection, then create some of their own. Discussing why you’re drawn to a specific art style is one thing—showing why you are is another. Not only do we want families to have fun together, but we’d also like to encourage them to understand each other better during this bonding experience.

Posted by Unknown at 1:41 PM No comments:

Whistler was born in Lowell, Mass., in 1834, and best known for his influence on artistic theory. Early on, Whistler was immersed in art. At the age of 11, he enrolled in the Imperial Academy of Fine Arts in St. Petersburg, Russia, where he did well, before moving back to London with his relatives in 1847.

Though his mother sent him to Christ Church Hall School with the hope that he would become a minister, Whistler felt that a career in religion was not for him. He applied to the United States Military Academy at West Point, where, though he was accomplished at drawing, his grades were poor and he flouted authority. After being dismissed from the academy, Whistler tried his hand at mapping the East Coast of the United States for military and maritime purposes, but was transferred to another division of the Coast Survey. He lasted only two months there before leaving for France to pursue art as his true calling.

Later in his career, Whistler became a leading proponent of “art for art’s sake,” an idea he shared with his friend and rival Oscar Wilde. He believed that art was not something that should strictly illuminate a moral purpose, but should instead serve as an extension of the artist’s persona and emotions. An example of his philosophy, the painting “Nocturne in Black and Gold: The Falling Rocket,” was criticized heavily by the art critic John Ruskin. Whistler ended up suing Ruskin for libel. The artist won but he was only awarded a farthing (a quarter of a penny). The cost of the case and the debts accrued while building his residence caused Whistler to fall into bankruptcy midway through 1879.

Whistler continued to travel and produce art in Paris, London, and Venice. He went where he was commissioned, and his paintings sold well. He also published a book detailing his artistic ideals that, unfortunately, led to a complete breakdown of his friendship with Wilde. Whistler returned to London in 1896, when his wife was diagnosed with cancer; she died two months later. In the final years of his life, Whistler produced minimalist seascapes and corresponded with some of his old acquaintances. He founded an art school in 1898, but his poor health and infrequent teaching schedule led to its closure three years later. His health continued to decline and he died in 1903 on July 17.

The Georgia Museum of Art has a selection of Whistler’s art that highlights many of the qualities he worked to instill in his paintings. The canvases he produced act as his lasting contributions to artistic conversations and debates even today.

Posted by Unknown at 1:35 PM No comments: