Our team of committed volunteers is hard at work planning Elegant Salute XVI: An Imperial Evening, which will take place January 26, 2019. Held every other year, Elegant Salute is the museum’s single most important fundraiser, supplying crucial funds for educational programming and exhibitions that let us fulfill our mission to bring art to the people of our state. 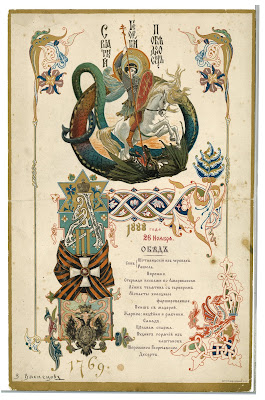 This year’s gala takes the exhibition “The Reluctant Autocrat: Tsar Nicholas II” as its inspiration and is chaired by Sarah Kraft Peterson and Isobel “Ibby” Parker Mills. Parker Curator of Russian Art Asen Kirin is organizing the exhibition, which focuses on the last two Romanov rulers: Nicholas II and his father, Alexander III. Only the second dynasty to rule Russia, the House of Romanov maintained power for some 300 years, until the Russian Revolution, in 1917.

“The Reluctant Autocrat” will include many works from the Parker Collection at the museum (rare books, vintage photographs, elaborate silver objects, medals, portraits, militaria, porcelain and costumes) as well as supplementary objects from Bob Jones University Museum of Art and Gallery and from the promised gift of Marina Belosselsky-Belozersky Kasarda. Highly ornamented and rich with meaning, these works of fine and decorative art are already supplying the décor and flowers committee, headed up by past Elegant Salute chair Maggie Hancock, with plenty of ideas.

Ham Magill, Gordhan Patel and David Matheny are in charge of fundraising this time around, with a goal of $200,000 in sponsorships. We know you can help them get there. Devereux Burch is in charge of the social committee, Airee Edwards is chair of the after-party publicity committee, Bree Hayes is having fun planning the menu with her compatriots, Mike Landers is running the entertainment committee, Evelyn Dukes is once again ably handling logistics, and Maggie Hancock and Ligia Alexander are once again imagining exquisite decor and flowers.

The evening will begin with cocktails at 6, in a heated tent in the Jane and Harry Willson Sculpture Garden, followed by dinner in the M. Smith Griffith Grand Hall. Attendees will partake of a Russian-inspired meal, then return to the tent for the after-party: From Russia with Love. Guests can dance the evening away in a James Bond–themed environment while they enjoy dessert.

As an undergraduate student, Ted Kincaid disabled the light meter on his Polaroid camera. A longer shutter speed let him capture time in motion instead of static images. Kincaid has since focused his artistic practice on the exploration and exploitation of photography’s tug-of-war between reality and artistic truth. He uses digital media both to create manufactured “photographs” and to deconstruct and radically reorder segments of photograph into pure color and form. This second process forges the focus of “Even if I Lose Everything,” Kincaid’s first solo museum exhibition, which will be on view at the Georgia Museum of Art from November 17, 2018, to January 13, 2019.
“Even if I Lose Everything” features a series of abstracted skyscapes. Kincaid digitally dissects photographs (both his own and those by other artists) of skies, using their colors, forms and shapes to reinterpret and reconstruct reality. The name of the exhibition stems from Kincaid’s thought that “memory, as time progresses, tends to, bit by bit, be replaced by memories of the memory, rather than fact. At some point, many of our memories become entirely a new construct.” The result is a placid but potent meditation on the subjectivity of memory.
The fact that Kincaid’s exhibition links inner worlds to skies and clouds is no anomaly. Romantic painters’ ideal of the sublime merged fantasy and reality in the 19th century. Although these artists often painted landscapes or figures rooted in physical existence, they depicted their subject matter through the lens of personal experience. Within their works, clouds evoked ideas of divinity, emotion and transcendental experience.
Georgia Museum of Art director and curator of the exhibition William U. Eiland sees this effect at the core of Kincaid’s work. “In Ted Kincaid’s studies of clouds we find intense interest not only in various scientific phenomena associated with them but also in a novel and technically challenging means by which to present them,” Eiland says. “I believe his inspiration in these glorious images of clouds lies in the words of Keats, Shelley, Wilde and Blake: they are equally as poetic.” Kincaid states that he sees his work as continuing the romantic tradition through subject matter and execution. He strives to unite digital photography and painting into a single, modern entity: “Neo-Romanticism, if you will,” he says.
Kincaid enjoys that, even though his aesthetics may shift across projects, the core idea is the same. This unique vision has earned him recognition in his home state of Texas and across the U.S. He has been reviewed in Artforum, Artpaper and Art on Paper, and his work is included in the permanent collections of the Dallas Museum of Art, the Museum of Fine Arts Houston, the Museum of Fine Arts in San Antonio and the U.S. State Department and the Human Rights Campaign Headquarters in Washington, D.C. One of his large cyanotypes—a type of photographic image producing a white image on a cyan-blue background—is also on view at the Georgia Museum of Art, in its Barbara and Sanford Orkin Gallery.
--
Penske McCormack
Intern, Department of Communications