The Georgia Museum of Art recently received an eight-day repeating brass clock, ca. 1850, as a promised gift from the estate of the late Mrs. M. Smith Griffith. The clock is on display in the galleries and is labeled on the inside: 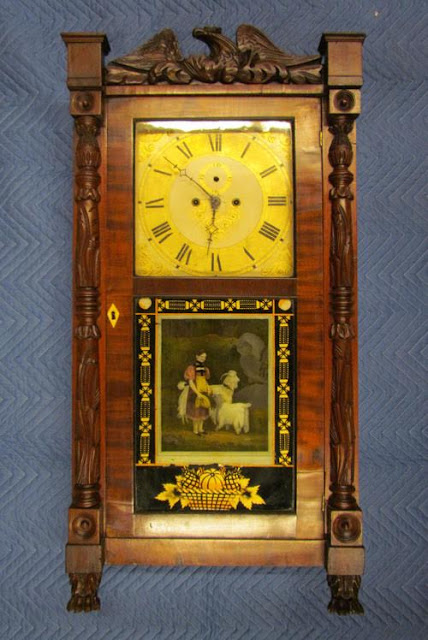 The label was printed by S. Rose, Printer, Macon. Burr & Pooler was a clock-making firm in Lexington, Connecticut, active from 1838 to 1860. Connecticut, at the time, was the center of American clock manufacturing. The fact that the label was printed in Macon, Georgia, suggests that the clock pieces were shipped down to Georgia and the clock was assembled there ca. 1850, a practice that was common at the time. As Samuel N. Thomas Jr. writes, in his essay in “Homecoming: The Sixth Henry D. Green Symposium of the Decorative Arts,” doing so allowed manufacturers to exploit slave labor and to minimize shipping-related damage.

S.W. Nichols appears to be Simon Wood Nichols, who was a merchant in the area of Clinton, Georgia, and an investor in local real estate. This clock was almost certainly made for him to resell, rather than for his personal use. As a result of technological advancements that allowed for mass production, by the middle of the 19th century clocks had become affordable for the average person and a common household good, thus making them a profitable item for merchants to sell. The advent of the railroad changed perceptions of time and encouraged households to run their schedules according to the clock.

The clock also reflects aesthetic tastes of the time, with its sentimental Victorian painting of an Alpine shepherdess and two of her sheep, which would have been painted on the clock by young women, following the outline of a print placed on the reverse of the glass. Such a clock would have often been the focal point of the home, placed centrally on the mantelpiece, and would have displayed the family’s dedication not only to modern punctuality, but also to good taste.

Posted by Unknown at 4:16 PM No comments: