"Gifts and Prayers" and Music from the Golden Age of Russia

This past Tuesday, the Hugh Hodgson School of Music held an ensemble concert inspired by our current exhibition on 19th century objects from Russia titled “Gifts and Prayers: The Romanovs and Their Subjects.” The concert program, “Music from the Golden Age of Russian Culture,” focuses on Russian music from that same period and examines another side of art from the era of Romanov rule. Some highlights of the concert include:

Scherzo in A flat Major by Alexander Borodin


Just as some of the gifts given and received during the House of Romanov included enameled miniatures, it turns out music can have miniatures too. Clocking in at three minutes when played at the correct tempo, this vivacious and lively piece belies Alexander Borodin's own interesting background. Borodin, who was a bright youth with a passion for both the sciences and the arts, was denied access to higher education because he was born out of wedlock to a Georgian prince and a commoner. Eventually, through the help of his mother and stepfather, Borodin enrolled at the academy of medicine in Saint Petersburg.

Sonata for Violin I: Allegro by Mikhail Glinka


Glinka is known for his particularly Russian brand of classical music, and his works were performed often during the Romanov Tercentenary in 1913, which celebrated the rule of the Romanov dynasty. Under the rule of Nicholas I, Glinka's “The Life of a Tsar” became the national opera of Russia.

The last highlight is “Ya li v pole da ne travushka bila (Were I a blade of grass)” from Seven Romances Op. 47 by Pyotr Ilyich Tchaikovsky, sung here by Polish soprano Teresa Zylis-Gara. This sorrowful and graceful piece takes its words from a poem published in 1870 by Ivan Surikov, titled “Little-Russian Melody.”

Highlights from the Permanent Collection: "Saint George and the Dragon"

This Tiffany stained-glass window depicting St. George and the Dragon has made a circuitous journey over seven decades to its current home. Installed in the second-floor overlook of the Georgia Museum of Art, in windows facing east, this beautifully crafted work of art is finally on view to the public.

The subject of the window is the story of St. George. In the tale, a dragon lives in a spring or lake, preventing local townspeople from gathering water. To pacify and distract the creature, the villagers offer up sheep as a sacrifice. If no sheep are available, a maiden is offered. The king’s daughter is one such maiden, but while she awaits her fate, St. George appears on horseback, makes the sign of the cross and slays the dragon. The citizens then convert to Christianity.

The window shows St. George after his triumph, with his foot on the head of the monster, a final gasp of flame issuing from its mouth. The saint’s delicately painted face shows

his gaze heavenward. The tips of his sword and standard have a faint blood-red tinge. Layered, rippled blue glass creates the effect of undulating water in the lake behind him, and pinkish drapery glass captures the folds of his cape. St. George’s scale-like armor is made up of numerous small sections of green leaded glass. The brilliant colors and various textures of the glass help accentuate the moment of his victory.

Much of the window’s history was lost over time and changes of stewardship. Until recently, it was listed in the museum’s files as by an unknown artist, possibly German, but dedicated investigation has uncovered some of its full story. Before his death in 1938, George Foster Peabody, famed philanthropist and friend to the University of Georgia, wrote to UGA president Harmon Caldwell to donate the window to the university. The window was eventually installed on campus in Strahan House, a faculty residence. It stayed there until the mid-1960s, when the building was razed for the new Law Library. At this time, the window was transferred to the museum’s permanent collection.

For more than 30 years, the window was installed in the stairwell of the original Georgia Museum of Art on North Campus, now the university’s administration building. When the museum relocated in 1996, the window was removed and remained crated and in storage for 15 years. As part of the museum’s subsequent renovation and expansion, completed in 2011, it was finally ready to go back on display. 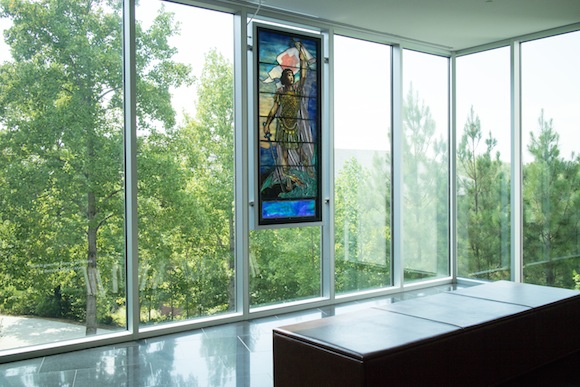 Unfortunately, the window was damaged during preparations for that opening and required considerable conservation. Botti Studios in Chicago, Illinois, worked on the window for approximately two years, documenting it in detail and removing, cleaning, conserving and reinstalling much of the stained glass. Once the window returned to Athens, work began in earnest to design and construct a mount so that the work of art could be illuminated with natural light during the day and backlit during the evening with LEDs. Local craftsman Hunt Leathers led a team to create an elegant steel frame to house the several-hundred-pound window within the mullions of the overlook window.

The window’s damage resulted in unforeseen benefits. During the restoration, with the help of archivists Steven Brown and Gilbert Head at UGA and local stained-glass artist Marianne Parr, I was able to rediscover the window’s history and, most important, its maker. In addition, its placement was upgraded to a more prominent location than had been planned in 2011. The window, in a sense, was reborn.

This article originally appeared in the Autumn 2016 issue of Facet.

Our current exhibitions "Icon of Modernism: Representing the Brooklyn Bridge 1883–1950" and "Man's Canyons: New York City on Paper" show visual representations of the bridge and New York during a period of changing social attitudes and perceptions; music was another creative discipline that reflected those times.

Of course, you wouldn't think times had changed all that much based on this studio take of "The Brooklyn Bridge" from 1947. Performed by Frank Sinatra, this song was featured in the film "It Happened in Brooklyn," which is screening for free tonight as part of our Brooklyn Bridge film series at 7 p.m. in the M. Smith Griffith Auditorium.

The writers and producers of this light-hearted musical comedy were aware of the growing generational gap between those who remembered how things were and those who saw only modern life, and they used music to contrast the old and the new. Check out two versions of the same song, also featured in "It Happened in Brooklyn."

Outside the film, New York City's contributions to musical history in America has been incredibly rich and diverse. The city is the birthplace of hip hop, doo woo, new wave and salsa, and two of America's most celebrated composers, George Gershwin and Aaron Copland, were born in Brooklyn. For those interested in hearing more of the music created contemporaneously with the paintings featured in "Icon of Modernism," here are a few select playlists of music from Tin Pan Alley, which was the name given to the row of music publishing houses in New York on West 28th Street between Fifth and Sixth Avenue, where popular music flourished from about 1885 through the 1950s.

This first playlist features 80 tracks, some of them the same songs with different arrangements, for a broader view of songwriting during this period.


Gershwin got his musical career started in Tin Pan Alley, eventually moving on to writing Broadway theatre tunes, classical music, and Hollywood movie scores. Some of his most recognizable works include "An American in Paris," "Rhapsody in Blue" and "Porgy and Bess." This particular playlist features his early songs from Broadway and Tin Pan Alley.

Have a favorite song from the early 20th century? Be sure to share with us in the comments!

“Driving Forces: Sculpture by Lin Emery” is on view now through April 2, 2017. Four of Emery’s large kinetic sculptures, including "Octet," "Splay," "Lyric" and "Umbrella Tree," will be outside in the Jane and Harry Willson Sculpture Garden, and five smaller sculptures will be inside in the Alonzo and Vallye Dudley Gallery. Included indoors is a maquette of "Tree Flowers 2" (also in the exhibition) to show visitors how Emery's works evolve from paper model to sculpture. Check out the video below to see the sculptures in motion.


An internationally recognized artist, Emery takes inspiration from the kinetic appeal of music, dance and natural forms, especially flowers and trees, to design works that move gently in response to the wind. Her main materials, polished and brushed aluminum, are the same as those used in boat building in New Orleans, where her work can be found throughout the city. Annelies Mondi, the museum’s deputy director of the museum and curator of the exhibition, came upon Emery’s work while in New Orleans. Mondi said, “It was incredible. She really is a big part of the city, and that intrigued me.” Emery was born in New York City in 1928 and studied under Russian sculptor Ossip Zadkine before settling in New Orleans.

Playwright Edward Albee, who knew Emery from when they were children, compared her sculpture to that of Alexander Calder and George Rickey, both of whom also make use of movement in their work. Albee writes, however, that Emery’s “work can be confused with no one else’s; the world of kinetic art is healthy in her mind and hands.” Emery's sculptures are the latest to be featured in the Jane and Harry Willson Sculpture Garden. Opened in 2011, the sculpture garden is devoted to the works of women sculptors. Previous exhibitions there have focused on sculpture by Alice Aycock, Patricia Leighton, Chakaia Booker and Steinunn Thorarinsdottir.