What do Julia Roberts, Nicolas Cage and the Georgia Museum of Art all have in common? They all love and own works by folk artist Elayne Goodman.

Goodman didn’t always have a base of celebrity followers. She came from humble beginnings, born in 1940 in Columbus, Mississippi. Growing up on a farm outside Columbus, Goodman always had a knack for creating unique object, but never considered her work “art” as she had never seen anything similar to compare it to. She spent much of her adult life supporting her family as a surgical nurse but soon returned to school to study her real passion: art.

Goodman credits some aspects of her work to having been born during the Great Depression. During this era, materials were limited, and people had to work with what they had, an influence that continued even after the US economy recovered. She continues to use anything available—wood, fabrics, paint, buttons and beads—to make her art. She can take even the simplest object and turn it into something colorful and intricate.

Today, she has created more than 3,000 works of art and continues to make more. The Georgia Museum of Art is fortunate to have one of her pieces, “American Flag,” detailed with buttons and beads and currently on display on the Patsy Dudley Pate Balcony.

Posted by Unknown at 6:57 PM No comments:

The Power of Preservation

Mary Franklin, an Athens native, was born on February 25, 1842. Throughout her lengthy career as an artist, Franklin trained all over the United States and in Paris. After decades of being a student, Ms. Franklin She eventually returned to her roots and taught with the Athens Art Association in Peabody Hall. She loved the University of Georgia so much that, upon her death, in 1928, she donated her entire estate to the school.  Part of this donation included a series of paintings that were hung throughout campus.

Some of Franklin’s works were hung in Soule Hall, where they were respected and admired for many years. During World War II, Soule Hall changed from a women’s dorm to a school for the navy, and the paintings were put into storage.

In the 1970s, these paintings reappeared at the Georgia Museum of Art, with little paperwork. While they had been cared for at one time, they did not arrive unblemished. The paintings suffered from surface loss, cracks, stains and unstable frames with gaping holes. Fortunately, they were about to have a change in luck.

This good fortune came in the form of Hildegard Timberlake, 92, and her son, Tom, 52. Ms. Timberlake had been both the editor and president of the Art Association over the years, and Tom shared her love of the arts. The pair wanted to do something about the condition of Franklin’s prized paintings and decided to make the admirable commitment to restore them to their former glory. They hoped to have the rest of the world enjoy the paintings as they had and found a way to sponsor the conservation.

“My favorite painting is ‘Nomad,’” said Hildegard. “‘Nomad’ is compelling because she acts as a caretaker. But a caretaker of what? Is it nature, is it history, is it political, or is it bonds to the family? The purpose of the caretaker is suggested but not imposing. Mary Franklin's composition of the painting is well done. The color theory is well applied, even outstanding, with its blending method. The expression of the caretaker is sincere with some pride looking down on the observer. Shadows reflect the observance of nature, climate and sunshine. Her body structure shows that she is carrying a burden, but is ready to carry it with pride and strength. A great painting!”

Susan Jones, a conservator from Atlanta, restored the paintings. Jones has a range of experience working with older paintings, including one by Klaus Molenear, a 17th-century Dutch artist. She explained both the challenges and rewards of conserving the Mary Franklin paintings: “Outside of getting the paintings stabilized, I would say that the texture of the canvas was the most difficult part. [Franklin] used a very heavy linen, and although she did not mind putting paint on the canvas, it still left a very rough texture and was a challenge to clean. Aside from that, I loved finally getting down to the original vibrant colors that she used and seeing the paintings come to life.”

“Nomad,” the largest of the paintings, was the first to be restored. The Timberlakes provided funding, and the museum sent the framed painting to Jones in Atlanta. “Nomad” came back in incredible form, and the Timberlakes decided to fund the conservation of another painting from the series, “Tunisian Perfume Market.” The two restored paintings were publicly unveiled and put on temporary display for others to enjoy for the first time in more than 40 years.

Hildegard Timberlake's deep affection for the paintings of Mary Franklin caused her to donate funds for the conservation of two paintings in the permanent collection. At this event, the results were shared with the Timberlakes, museum supporters and staff. May 21, 2015. 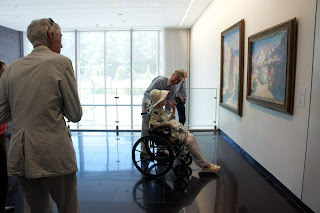 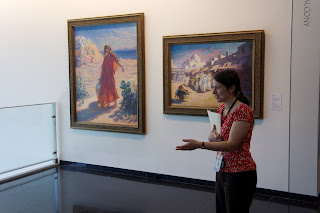 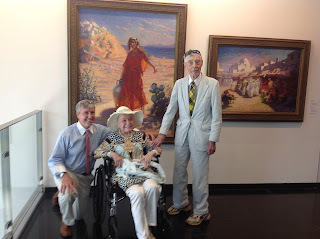 The Georgia Museum of Art is pleased to announce the acquisition of three bracelets and four necklaces by Georgia artist St. EOM (1908–1986), some of which are pictured below. 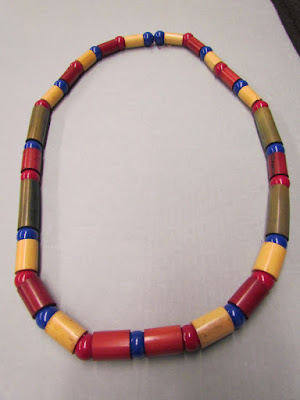 Born to a Georgia sharecropping family, he left his home to spend time in an artist’s colony in New York City during the 1920s before coming back down to Georgia and transforming the farm in Marion County that he inherited from his mother into a colorful compound called Pasaquan. Claiming to receive messages and visions from people from the future, he refused to go by his birth name, Eddie Owens Martin, instead going by the moniker “St. EOM,” as he felt it more accurately depicted him as the prophet and visionary that he saw himself as. He created Pasaquan in order to show the intersection of the past, present and future as a seamless whole, combining the visual art from many different cultures, such as patterns from ancient Greece, architectural forms from East Asia and statues inspired by ancient Mayan art. Visitors to Pasaquan are frequently overwhelmed by vibrant color and seemingly endless variety on display throughout the compound. 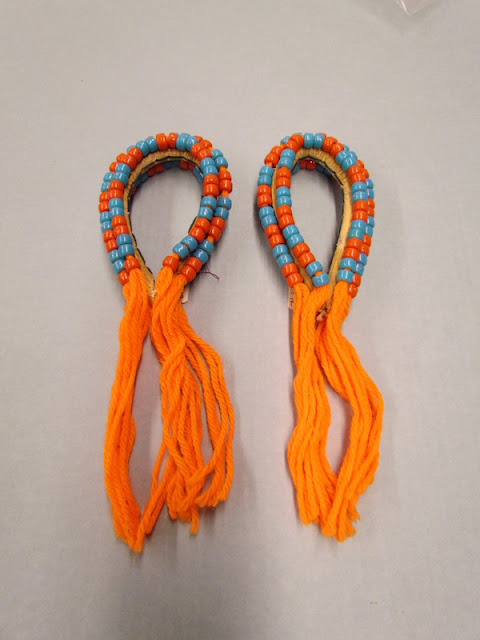 Sadly, St. EOM died of a self-inflicted gunshot wound in 1986, but his legacy is now preserved by the Pasaquan Preservation Foundation and by the Kohler Foundation, who are now restoring Pasaquan to its original glory. 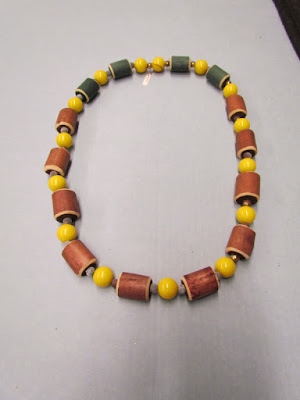 St. EOM’s jewelry that the Georgia Museum of Art recently acquired also displays the same love for vibrant color and the use of motifs from many cultures.
For more information, see:

Posted by Unknown at 4:28 PM No comments: