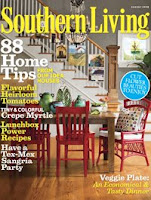 * August's edition of Southern Living has lots of information on Athens, including bits about the State Botanical Gardens and area shops and restaurants. But the issue also includes a 1/3-page blurb on the award-winning exhibition catalogue for Amazing Grace: Self-Taught Artists from the Mullis Collection. 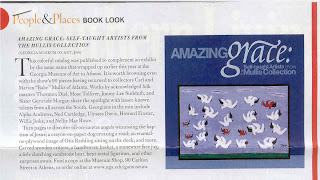 
* The Red & Black has an article on the museum's new/old ring exhibition: "The Ring Shows: Then & Now and Putting the Band Back Together."


* "Art Notes" in the Athens Flagpole also visited the museum. The museum-relevant section:

South of the Border: Perhaps to welcome its new neighbor - the massive and labyrinthine art school - but certainly to mark its expansion, the GMOA has put out a lot of the good stuff from its permanent collection, including some big names - Matisse, Bonnard and Dufy to name a few - as well as some regional favorites and a room of paintings and works on paper from the European Renaissance and Baroque eras. Many of these selected works from the permanent collection will be put on long-term display when the new, 30,000-foot addition to the GMOA is completed in two years' time. Also on view is a traveling exhibition from California, “Everett Gee Jackson/ San Diego Modern: 1920-1955,” that traces the American artist’s career from his Impressionist beginning to his mid-century Modern style. Indeed, one can see the trajectory of much of the first half of the 20th century within Jackson’s oeuvre that bears the traces of the influence of the American Regionalist and Mexican muralists. Accompanying this traveling exhibition is a selection of in-house paintings, prints and drawings from both Mexican muralists David Sisqueros, José Clemente Orozco and Diego Rivera, as well as a wide-range of artists they influenced.

Freshly Picked: Tucked away in one of the museum’s smaller galleries is a collection of new acquisitions donated in honor of late UGA art history professor Andrew Ladis. Reflecting his own extensive collection of art and his intellectual and artistic contributions to the GMOA, there are examples of American paintings, prints and drawings from the 20th century; a delicately-rendered small red-chalk drapery study from a Sienese late-Renaissance artist; and a still from one of Jim Herbert’s black-and-white films, featuring two nude youths who look as if they could have been lifted from classical statuary.
Posted by Paul at 8:41 AM No comments: