This week’s Weekly Work focuses on "Georgia II" by Leo Twiggs. The Georgia Museum of Art is thrilled to host this iconic artist’s work. 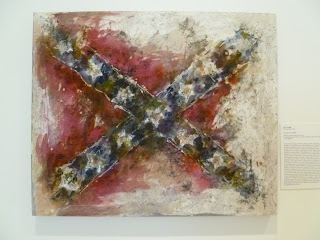 Twiggs was born in St. Stephen, South Carolina. He attended Claflin University for his undergraduate degree, and later studied at the Art Institute of Chicago and New York University. At NYU, he studied with the celebrated African American painter and muralistHale Woodruff. Twiggs received his doctorate in Art Education right here at the University of Georgia in 1970. He was the first African American student to receive a Doctorate of Arts (Ed.D) from UGA.
Throughout his career, Twiggs has been honored in more than 70 solo shows. As professor of art at South Carolina State University, he helped develop the I.P. Stanback Museum. He was named Professor Emeritus in 2000. Furthermore, Twiggs was the first visual artist to receive the Verner Award for outstanding contributions to the arts in South Carolina.
Twiggs is best known for the style of painting he developed, which makes use of the batik technique. This technique involves the artist using wax to prevent certain areas of cloth from being dyed. Master batik artists are especially skilled in color mixing. Perfecting batik is very difficult because layers of colors are blended to create the desired shade. The technique can be clearly seen in "Georgia II" and allows Twiggs to create many subtle textures. Twiggs often deals with the role of relics, images and icons in southern culture in the United States.
Posted by Kayla Murphy at 4:10 PM No comments:

We are starting something new at Curator’s Corner! Each week I will write about a work from the Georgia Museum of Art’s permanent collection or one of the exhibitions. I will give background information on the piece and its artist. If you have a request, let us know!

This week’s Weekly Work spotlights Salvador Dalí’s “Angel of Victory.” The artist created this bronze sculpture on a wooden base in 1970. It represents Dalí’s return to Catholicism late in life.

Dalí is known for his Surrealist works. Born in 1904, the Spaniard was heavily influenced by the works of Renaissance masters. He studied at the Academia de San Fernando in Madrid but was expelled in 1926, before graduating. The same year, Dalí traveled to Paris for the first time, where he met Pablo Picasso. Picasso became a significant influence on Dalí’s works, as did such renowned artists as Joan Miró, Raphael, and Bronzino.

In August 1929, Dalí met his wife Gala (born as Elena Ivanovna Diakonova). She was a Russian immigrant married to surrealist poet Paul Éluard. Ten years his senior, Gala was Dalí’s muse and huge source of inspiration in his work. Under her influence, he officially joined the Surrealist group in the Montparnasse quarter of Paris.

In 1940, Dalí and Gala moved to the United States to escape the difficulties of World War II. They resided here for eight years, and Dalí returned to his Catholic faith. This rediscovery of religion was a huge inspiration in his later works.

On January 23, 1989, Dalí died of heart failure at the age of 84. He outlived his beloved Gala by seven years. It is speculated that Dalí lost his will to live following her death and made several attempts to end his own life.

Other notable sculptures by Dalí are “Lobster Telephone” and “Mae West Lips Sofa,” both of which were commissioned by Edward James, a surrealist artist and patron.

Mobile art, or iPhoneography, is an emerging digital art form in which artists create photos, videos, paintings and music on mobile devices. The most common platforms of use include the iPhone, iPad and iPod, but artists can express their visions with BlackBerry and Android products as well.

iPhoneArt.com, a hub for the mobile art community, displays Van Der Beek’s works as well as works from first runner-up Nettie Edwards of the United Kingdom and second runner-up Cindy Patrick of the United States. A list of winners, finalists, semi-finalists and honorable mentions selected from 2,478 global submissions can be found on the IPA Mobile Art Grant page.

The site also provides critiques on art apps and houses a large gallery showcasing portfolios of various mobile artists. Most of the photos take on a haunting, surrealist quality.

IPA plans to publish a book containing works by the most influential digital artists of the past year as well as works by the top 20 grant finalists selected by the IPA grant panel.

Posted by Nicollette Higgs at 11:51 AM No comments: